SEATTLE, 2015-3-9 — /EPR Retail News/ — Seven years after writing a book about dogs, a Starbucks barista landed on preeminent list of bestselling books in the U.S.

The New York Times expanded its number of bestselling book categories to include monthly selections on 12 specialized topics such education, fitness, and animals.

“I remember thinking I wish they would have had that list a few years ago because I’ve written several books about dogs, and maybe one of them could have received the ultimate recognition,” said Ken Foster, a Starbucks partner (employee) in New Orleans. “The timing didn’t seem to work out and I didn’t think I’d fulfill my childhood goal of becoming a New York Times bestselling author.”

That dream carried Foster to grad school in New York for a master’s degree in writing and to countless coffee shops in the Big Apple where he practiced his craft. Writers are generally solitary creatures. Although they work alone, they do like being around people. Years before he became a barista, Foster found the perfect writing environment in a Starbucks.

“There’s a positive pressure when you’re writing, surrounded by a mix of people. Lifting my head from my laptop from time to time I’d look around the coffee shop. Some of the characters in short stories were inspired by other customers,” he said. “Maybe writers enjoy coffee shops because everyone there is on their way to or from somewhere. They’re in the middle of their own story.

A deeper meaning to writing about dogs

With a passion for coffee and the Starbucks® store environment, Foster donned a green apron in May of 2014. He joined Starbucks for the company’s benefits and flexible scheduling. Foster also volunteers in New Orleans with a nonprofit he started, The Sula Foundation, which provides low-cost services for dogs, particularly pit bulls.

His most popular published books are “The Dogs Who Found Me,” “Dogs I’ve Met,” and “I’m a Good Dog.” That’s a lot of books from someone who wasn’t a dog owner initially. During a writing assignment in Costa Rica, Foster found companionship with a mutt that lived on a farm where he was staying. When he returned to New York he had trouble writing without a dog around. He adopted a pit bull from an online database of homeless animals, and later found himself sheltering and finding homes for many other dogs.

There’s a deeper meaning to Foster’s work writing about dogs. The former New Yorker describes in his memoir how animals helped him cope with the 9/11 tragedy, and with Hurricane Katrina after he moved to Louisiana.

“When I write about dogs, I’m always also writing about people.  Dogs are fascinating as a subject because they really do cross into all aspects of our lives and all cultures.  Particularly when we live in urban environments, they keep us connected to nature and the world around us—they help pull us out of our own problems,” said Foster. “Dogs may be more naturally social creatures than people are, so they make a great example to follow.”

Last October, as he was heading to bed before an opening shift at Starbucks, Foster glanced at The New York Times monthly bestsellers list of animal books.

“There, at number five on the list was…me,” he said.

His book, “Dogs I Have Met and the People They Found,” made the list seven years after it was published because Amazon promoted an eBook edition of his work as a deal of the day for under $2.  To his credit, Foster’s book remained on the list even after the price went back up to just under 10 bucks.

The book is a compilation of true stories about “karmic canine rescues” that demonstrate the power of stray dogs to enrich the lives of people who open their homes to the animals.

After posting about his achievement on Facebook, Foster said he went back to check he wasn’t imagining what he saw. Thinking, “It couldn’t be real.”

“What did I do after I found out my book was on The New York Times bestseller list? I went to bed early so I could be at Starbucks for work early the next morning. Maybe that’ll change one day if I have a book that’s a bigger success, but for now I’m happy to be involved with two things I love – coffee and writing.”

Foster is working on a book about a different kind of animal, a deer, and a family in Michigan who has raised it to be a pet.

This is Ken Foster’s Starbucks story. What’s yours? Starbucks partners and customers, share your story newstips@starbucks.com 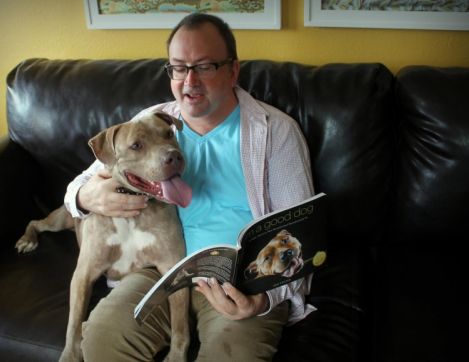 Starbucks barista lands on preeminent list of bestselling books in the U.S.