MANCHESTER, England, 2015-9-15 — /EPR Retail News/ — The Co-operative Food will donate its warehouse depot surplus food to local charities as it diverts food for over a million meals away from anaerobic digestion energy plants.

Following a successful trial at its depot in Castlewood, Derbyshire, the mutual is rolling out the programme from 14 September, supplying a range of chilled food items such as yoghurt, meat, fruit, vegetables and ready meals to the charity FareShare, which passes the food on to charities and community groups who transform it into nutritious meals for vulnerable people.

The findings from the trial show that in ten weeks The Co-operative redistributed 32 tonnes of food from one depot, contributing towards 76,192 meals.  The business estimates that in 2016 it could provide 500 tonnes from all depots – enough food for over a million meals.

“This project has the capacity to improve the variety and nutritional value of the food redistributed by the Co-op, and to significantly increase the number of people that FareShare can support. In addition to the huge human benefit there are significant positive environmental impacts as all of this food will be diverted from anaerobic digestion back into the food chain, feeding people first as was intended.”

“Only a tiny percentage of total food waste – around 1.3 per cent – comes from the grocery retail industry*, but we are committed to reducing this.  We are very grateful to all the suppliers that have agreed to support this initiative.”

“We’re really excited to be working with The Co-operative on this project and we commend them for rolling it out nationwide. It’s been fantastic to see how well the new process has worked at Castlewood, helping to provide thousands of meals to vulnerable people in Yorkshire. By working with their suppliers, staff and FareShare Regional Centres, The Co-operative has demonstrated real commitment to preventing food waste in the long term and to providing edible surplus food to projects supporting vulnerable people across England, Wales and Scotland.”

“We are delighted to see the progress The Co-operative Food has made in redistributing quality food from across its supply chain. No-one wants to see perfectly edible food in the bin when it can be used to feed people, that’s much better for society, the environment and the economy. This move will help the Co-operative Food and suppliers reduce the amount of food that is lost, and contribute towards the targets of the Courtauld Commitment 3** voluntary agreement.” 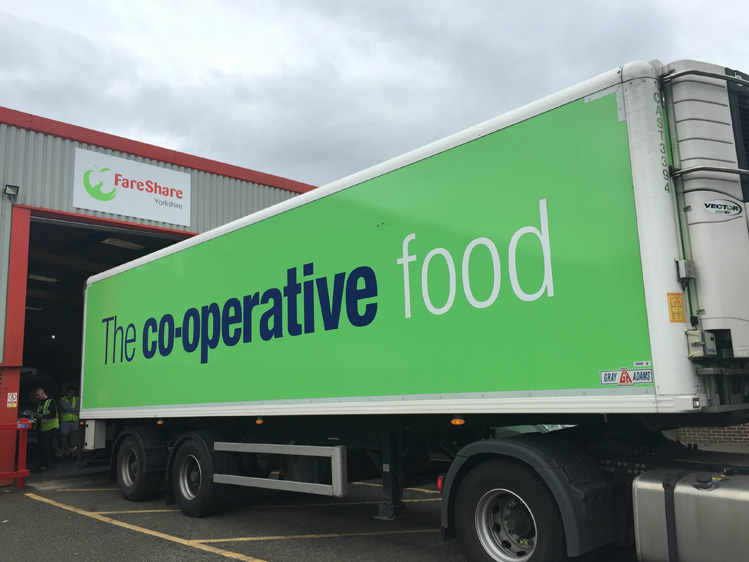