The consumption of bags in Lindex Swedish stores has decreased significant since the launch of One Bag Habit on June 1, 2017. Only about 30 per cent of Lindex customers have chosen to buy a bag which means that Lindex now to donates 280 000 euro to STEPS and WaterAid.

Göteborg, Sweden, 2018-Jan-18 — /EPR Retail News/ — One Bag Habit is a joint initiative launched by Lindex, KappAhl and H&M with the aim to reduce the consumption of bags and raise awareness of bags negative environmental impact. Just like all companies that has joined One Bag Habit, Lindex charge for bags in its Swedish stores and during the first seven months only about 30 per cent of Lindex customers bought a bag.

We are very pleased with the impact that our joint initiative have had and how it contributes to a better bag consumption. The fact that two-thirds of Lindex Swedish customers have found other, more sustainable ways, to carry home their products feels great, says Anna-Karin Dahlberg, Sustainability Manager at Lindex.

Like all companies that has joined One Bag Habit, Lindex donates the surplus from sold bags to causes that drive sustainable development, within environment or social issues. The sum from the seven first months is 280 000 euro and this money will be donated to the Swedish research program STEPS and the international organization WaterAid.

Since the launch of the initiative, several Swedish companies have joined and in the beginning of 2018, Lindex in Norway, Finland, Great Britain, the Czech Republic, Poland, Slovakia and the Baltics will also start charging for the bags.

Learn more about One Bag Habit at lindex.com

Lindex to raise funds for WaterAid

Sweden, 2017-Aug-28 — /EPR Retail News/ —  Starting August 24, customers who shop in Lindex stores will be offered to round up their purchase in favour of WaterAid. The collected money will go to WaterAid’s important work to improve access to clean water and sanitation in the world’s poorest communities.

The water issue is of great importance to Lindex and a part of our long-term sustainability work. We are doing this fundraising together with our customers to support WaterAid in their very important work, says Sara Winroth, Sustainability Manager at Lindex.

Each year WaterAid’s work changes lives for millions of people through improved access to clean water and sanitation in the world’s poorest communities. More children can survive their childhood, the risk for malnutrition decreases and families can stay healthy. Hours spent collecting water can instead be spent working and going to school. Access to clean water and sanitation can help communities and countries break the circle of poverty.

We are very happy and grateful for the strong commitment Lindex shows by supporting WaterAids work. It is fantastic that Lindex customers now in an easy way can take part and contribute to more people getting access to clean water. Every single amount donated will save and change lives for the world’s poorest people who today have to live without what we take for granted ­­– clean water, says Cecilia Chatterjee-Martinsen, Secretary General for WaterAid Sweden.

The campaign starts on August 24 and will continue until August 30.

WaterAid is an international organisation working for a world where everybody has access to clean water and sanitation. WaterAid works with local partners for sustainable and long-term solutions, and influences decision makers to increase efforts for these basic needs on national and global levels. WaterAid works in 37 countries and since 1981, WaterAid has reached 25 million people with clean water and 24 million people with sanitation. Visit www.wateraid.org/ukfor more information. 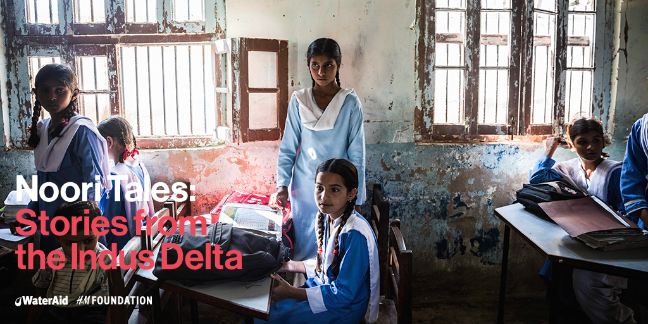 Stockholm, Sweden, 2016-Aug-17 — /EPR Retail News/ — Award-winning photographer Malin Fezehai travelled with WaterAid to the Thatta region in southeastern Pakistan to document the effects of climate change and water scarcity on the lives of schoolchildren living in the Indus River Delta. Pakistan is highly vulnerable to climate change due to its geography, high dependence on agriculture and limited water resources. Flooding, salinisation of groundwater and high temperatures are all on the increase, with potentially devastating consequences.

With the 31 images in this exhibition, Malin takes us on a journey through the canals and inlets of the Indus River Delta, as they flow from one of Pakistan’s largest and most beautiful lakes, the Keenjhar – the source of drinking water for Karachi’s 16.6 million inhabitants – through to the schools and communities in the region.

Global Program for Clean Water
Today, 650 million people globally live without safe water, and 2.3 billion don’t have adequate sanitation. But when water, sanitation and hygiene education is improved in schools, better health brings improved attendance and it creates a better learning environment that enhances performance. Gender equality is improved, since girls do not need to drop out of school or attend sporadically when they have their periods and there are no toilets available.

WaterAid and the H&M Foundation have partnered for the three-year, SEK 60 million Global Program for Clean Water which aims to provide sanitation, water and hygiene promotion in schools, with a view to improving health and education and transforming children’s futures. The partnership is working to give 250,000 children globally access to clean water and sanitation in schools by 2017. One of the areas supported by the Global Program is Thatta.

Explore the images and read more about the exhibition on www.nooritales.org or check out #NooriTales in social media.

Stefan Persson and H&M contribute to gender equality and the empowerment of women. This is acknowledged by the United Nations Association of New York (UNA-NY) that presents Stefan Persson, Chairman of H&M, the ”Humanitarian of the Year” award.

Stockholm, Sweden, 2014-11-4— /EPR Retail News/ — The leadership and dedication of Stefan Persson to gender equality and the empowerment of women make him an inspiration to all of us and a worthy recipient of our annual award, says Abid Qureshi, president of the UNA-NY.

“Empowering Women, Promoting Peace and Progress” is the theme of this years’ award which will be presented in New York on October 29 at the annual ceremony celebrating the founding of the United Nations. Each year the UNA-NY considers individuals who have accomplished important strides in achieving the Millennium Development Goals, including the issue of gender equality.

The UNA-NY recognizes H&M’s long-term sustainability work in Asia well as the contribution to international trade creating more than a million jobs in the textile industry, not least for women. The importance of collaborations between the Conscious Foundation and organizations such as CARE, UNICEF and WaterAid is acknowledged as well as the fact that gender equality has been H&M’s mission since its founding in 1947.

– Empowering women connects directly with the core values of H&M and who we are as a company. We know that the majority of the people employed by H&M’s suppliers in the textile industry are women and that a paid job with a stable income is a first step towards an independent life, says Stefan Persson.