SEATTLE, 2015-1-5 — /EPR Retail News/ — “I’ve never won anything,” said Jim, a California firefighter for 27 years. “I got the email that said ‘congratulations’ and I’ve been on cloud nine ever since.”

Jim and Steven, a postal worker from Texas, are the latest winners of Starbucks For Life, and this weekend is the final chance to join them through Starbucks® It’s a Wonderful Card Ultimate Giveaway.

Now through Monday, January 5, customers who pay using a Starbucks Card or their Starbucks® mobile app receive a code at the bottom of their receipt. After entering the code online, customers find out if they’ve won one of the 482,000 instant prizes or the ultimate prize of Starbucks For Life, which is one free food or beverage item from participating Starbucks® stores every day for the next 30 years.

Jim said he’ll be happy to share his Starbucks For Life prize from time to time with the “whole crew” from the fire department who often stop in to Starbucks with him.

“If I’m not drinking Starbucks, sure I’ll share the love,” he said.

It’s possible Jim might have to buy some ice cream too. In fire departments across the country, it’s a tradition for firefighters who have their names mentioned in newspapers or on television to buy a round of ice cream for the rest of the crew.

Steven’s workday at a Texas postal center begins just after a 5:30 in the morning run to his neighborhood Starbucks store for a dark roast coffee – a beverage that will be free for him every day for the next 30 years.

“I couldn’t be more pleased to be a member of the Starbucks family in this way. It’s so much more than coffee and pastries,” Steven said. “It’s getting to meet and know people too.”

The grand prizes of Starbucks For Life have an estimated value of $54,000. The ultimate prize also comes with a piece of Starbucks history – an exclusive Starbucks Card made of 10K hammered gold engraved with the name of each winner. There will be 10 winners in the US, one in the UK and three in Canada. For entry, eligibility and official rules visit www.starbucks.com/win. 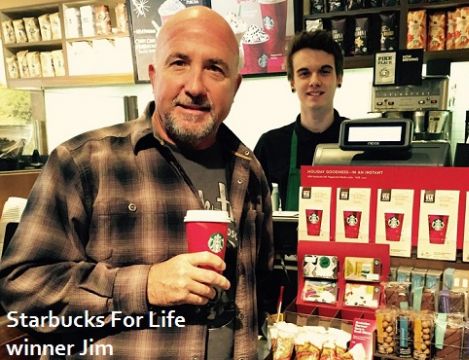