Milwaukee,  WI, US, 2014-1-21 — /EPR Retail News/ — In an effort to build upon its philanthropic efforts in Wisconsin and ease the toll the holidays take on food banks, Midwest retailer Meijer today donated two semi-trucks and trailers full of food to Feeding America Eastern Wisconsin, a food bank dedicated to distributing food to 1,000 food pantries, meal programs and other nonprofit agencies in eastern Wisconsin.

Meijer committed to filling the donated trucks with 5 pounds of food for every use of the hashtag #MeijerGivesWI on a social media campaign that kicked off earlier this week. Feeding America Eastern Wisconsin rose to the challenge, working with supporters to mention the hashtag a total of 770 times on Twitter and liking/sharing 5,732 times on Facebook, raising a total of 32,510 pounds of donated food to stock the food bank during this critical time of post-holiday giving.

Instead of just donating the amount of food generated from the campaign, the Grand Rapids, Mich.-based retailer announced it was donating an additional 100,000 pounds of food to Feeding America Eastern Wisconsin.

“Meijer wants to be a good neighbor in the communities we serve,” Meijer Co-Chairman Hank Meijer said. “It is important to us to demonstrate that commitment even before we open stores in the Milwaukee-area. We partner with Feeding America in other states in the Midwest, and are particularly excited to extend that partnership here to benefit the Wisconsin organization and get good food to people who need it.”

“Hunger doesn’t end when the holiday season is over,” said Bonnie J. Bellehumeur, president of Feeding America Eastern Wisconsin. “The timing of this donation proves Meijer understands that getting food to those who are struggling is a year-round challenge. This generosity from Meijer will have a significant impact on our ability to serve more people in need. We look forward to working with Meijer for a long time to come.”

Meijer is expanding into Wisconsin and has announced plans to open several Milwaukee-area stores as early as 2015. The retailer has a strong family and corporate tradition of caring, including significant support of hunger relief initiatives in the communities it serves. In fact, Meijer gives more than 6 percent of its net profit to charitable organizations each year, as well as offers a food rescue program at each of its 204 stores, and has a signature program called Simply Give that has generated more than $8 million for its food pantry partners throughout the Midwest.

The two semi-trucks and trailers donated to Feeding America Eastern Wisconsin were previously part of the Meijer truck fleet and replaced with ones that offered the latest technology in emissions control. The vehicles are part of a larger donation of 10 semi-trucks and 20 trailers – valued at nearly $400,000 – Meijer gave last year to food banks in the Midwest. Since 2010, Meijer has donated 60 trucks and 20 trailers to food banks and other community partners.

All of the vehicles were reconditioned and prepped for their next use, including new tires, maintenance inspections and new graphics specific to each donation recipient.

About Meijer
Meijer is a Grand Rapids, Mich.-based retailer that operates 204 supercenters and grocery stores throughout Michigan, Ohio, Indiana, Illinois and Kentucky. As a pioneer of the “one-stop shopping” concept, Meijer stores have evolved through the years to include expanded fresh produce and meat departments, as well as pharmacies, comprehensive electronics departments, garden centers and apparel offerings. Additional information on Meijer and the ability to shop for more can be found at www.meijer.com. Please follow Meijer on Twitter @twitter.com/Meijer and @twitter.com/MeijerPR or become a fan at www.facebook.com/Meijer. 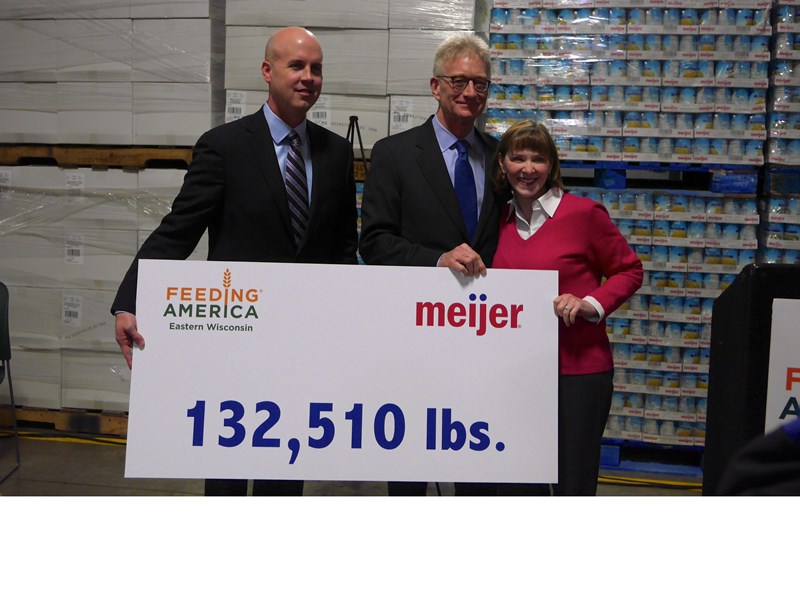