Mr Goyder said he was delighted Ian McLeod would continue to contribute to the future growth of Wesfarmers as Group Commercial Director, building on his leadership during the successful first six years of the Coles turnaround.

“Ian’s success with the Coles Division, which has more than doubled earnings before interest and tax and helped generate significant shareholder value for the Wesfarmers Group, highlights his credentials as a world class retailer and leader,” Mr Goyder said.

“By enhancing the customer experience, improving our fresh food offering and on-shelf availability, as well as continued commitment to everyday low prices, the Coles business is unrecognisable from the one we purchased in 2007.”

Mr McLeod said he was looking forward to his new role.

“When I started at Coles in 2008, I felt that Australians deserved a better retail experience, with better stores, better standards, better prices and better quality. We have worked incredibly hard to deliver improvements in all of these areas and have been rewarded with four million additional customers visiting our stores each week,” Mr McLeod said.

“I would like to thank every one of the 100,000 Coles team members for their dedication and commitment in support of the turnaround. Without them, any turnaround success would not have been possible.”

“I am delighted to be afforded the opportunity to help Wesfarmers further with my new role.”

Mr McLeod will take his new position at the beginning of July 2014 and working closely with the Group Managing Director and senior team will lead and provide executive oversight on a number of strategic initiatives and internal Wesfarmers programs.

Mr Goyder said John Durkan was a natural successor as Coles Managing Director given his strong track record of business success and his key role in the first phase of the Coles turnaround.

“Succession has been a major focus of the team at Coles over the past few years,” Mr Goyder said.

“I am extremely pleased that John Durkan, who has been part of Ian’s leadership team, will become Coles Managing Director and continue the Coles turnaround through the second phase of transformation.”

“John has proved his enormous value to the Group over the past six years and we are fortunate to have an executive of his experience and proven track record ready to step in to this pivotal role.”

Mr Durkan said he felt privileged to be given the chance to lead the next phase of the Coles transformation.

“This is a great opportunity, working with an outstanding management group and our 100,000 team members to reward our 19 million customers for their loyalty and make Coles the best food, liquor and petrol retailer in the country,” he said.

A copy of John Durkan’s career history is attached.

John joined Coles in July 2008 as Merchandising Director and has since been involved across many areas of the business. John was subsequently appointed Chief Operating Officer in June 2013.

John has added a wealth of customer, product and buying knowledge to Coles having worked for 17 years with Safeway Stores PLC in the UK, a large scale food retailer that operated supermarkets, convenience and fuel outlets. He left Safeway in 2004 as Trading Director.

Most recently, John was the Chief Operating Officer for Carphone Warehouse, the UK’s largest independent mobile phone retailer. That business spans 10 European countries, is fast paced and has a strong entrepreneurial culture, one that John is committed to enabling here at Coles. 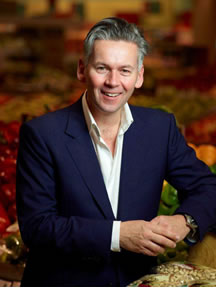