ALEXANDRIA, VA,  2014-4-9 — /EPR Retail News/ — Consumer optimism remains steady in April, a period in which the ongoing spring transition to summer-blend fuel usually increases gas prices and reduces optimism. While gas prices increased nearly another dime over the past four weeks, 44% of consumers remain optimistic about the economy, the same figure as March, according the latest monthly NACS Consumer Fuels Survey that examines how gas prices affect consumer sentiment.

Last year, consumer optimism dropped 5 percentage points between January and March, when gas prices peaked. This year, optimism increased from 43% to 44% since the beginning of the year, despite a 25-cent increase in retail gas prices since January.

Strong demographic and regional variations could be seen in the latest survey results. A majority (54%) of younger consumers — those ages 18 to 34 — are positive about the economy, and fully half (50%) of those in the West are optimistic. Meanwhile, consumers in the winter-ravaged Northeast and Midwest are least optimistic, with only 41% in each area saying that they are optimistic.

There are a few areas of concern in the latest results. Nearly two in three consumers (63%) expect prices to increase over the next 30 days, the highest percentage expecting higher prices since July 2013.

Also, consumers may be getting closer to changing their behavior if prices continue to climb. The price at which consumers say that they would cut back on driving was $4.05 per gallon, or 50 cents from what they say prices are in their area. The price at which consumers would dramatically change their behavior is $4.90, or $1.35 from what consumers say prices are in the area. As these gaps narrow, the potential grows for changes in consumer behavior. Both gaps this month are one-cent from the lowest reported in the last year, meaning that further price increases could affect consumer behavior, as well as sentiment. 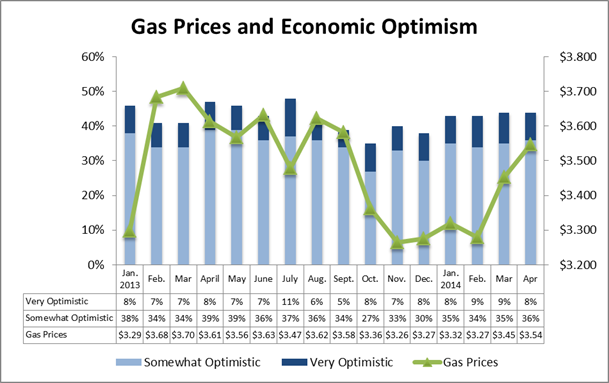 Every month, the National Association of Convenience Stores (NACS) conducts a nationwide survey in partnership with Penn, Schoen and Berland Associates LLC to measure consumer perceptions about gas prices and how they relate to broader economic conditions. For the April survey, n=2,007 gas consumers were surveyed from April 1-3, 2014. The margin of error for the entire sample is +/-2.19 at the 95% confidence interval and higher for subgroups. The OPIS weekly national average price for gas was $3.547 on March 31, the week in which the survey was fielded. Summary results from this and previous surveys can be found at www.nacsonline.com/gasprices.