In October 2013, the foundation invited all H&M employees and customers to make a difference. Through a global online voting process everyone had the chance to influence which three global development issues the H&M Conscious Foundation should support. The issues receiving the most votes were: education, clean water, and strengthening women.

“H&M is a great fashion brand that I always look forward to working with. My Friends and family also love the brand with its new Conscious line. I am so happy to work alongside a company that also choses to give back in such an impactful way. The H&M Conscious Foundation works with communities around the world to promote growth and development in a positive way. Clean water, education and strengthening women are 3 areas that the foundation focuses on. All three of these issues have directly affected my home country of the South Sudan, so it is with a sense of pride that I am happy to lend my voice to the H&M conscious Foundation”.

Alek was born in Southern Sudan and raised in the Dinka tribe. At fourteen, she was forced to flee to London to escape civil war. Soon thereafter, Alek was discovered at a London street fair.  She quickly rose to the top of the modeling industry and was named “Model of the Decade” by i-D magazine

Alek’s influence extends far beyond the fashion world; she spoke at the International Black Caucus Foreign Affairs as a member of a panel that included Hilary Clinton amongst others.  Alek has also served on the advisory board for the U.S. Committee for Refugees and she frequently speaks in New York area schools to raise awareness around famine in Southern Sudan and to educate children on the importance of nourishment.  She has also launched the Bracelet of Life campaign in conjunction with Médecins Sans Frontières/Doctors Without Borders.  Alek also works closely with AIDS awareness organizations, children’s charities, and non-profits dedicated to breast cancer research.

“We are very happy to have Alek as a part of our team and with her knowledge and background we are convinced that we will be able to achieve a lot of great things together, “ says Helena Thybell, global manager for the H&M Conscious Foundation.

The collaboration between Alek Wek and the H&M Conscious Foundation is initiated now and will run for three years to begin with.

Read more about the H&M Conscious Foundation and its work.

*The H&M Conscious Foundation is an independent non-profit global foundation initiated in connection with H&M’s 60th anniversary in 2007. The foundation is committed to use its resources to address some of the world’s most challenging problems and is the philanthropic arm complementing H&M’s sustainability work. 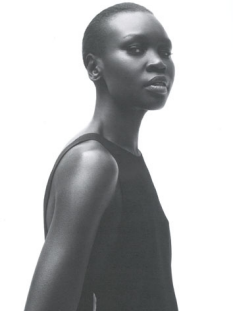