Chicken Dippers are pieces of 100-percent, high-quality white-meat chicken with no fillers that are lightly breaded in a tasty coating and served with a choice of Ancho Chipotle, Ranch or Honey Mustard dipping sauce. A cup-holder in the specially designed Dippers packaging helps keeps the sauce from spilling. Six “dippers” and sauce are value-priced at $1.99 at participating 7-Eleven® stores.

“Since we launched hot foods nationally five years ago, our chicken breast tenders and wings have been top-sellers, so we know our customers love chicken,” said Kelly Buckley, 7-Eleven vice president of Fresh Food Innovation. “Chicken Dippers are flavorful, juicy and can satisfy those who are hungry for a snack or small meal.”

Buckley added that consumers gave a “thumbs up” to the quality of the product and flavorful sauces. “The Chicken Dippers proved so popular during limited-time in-store tests that store operators asked to keep them at the conclusion of the trial period,” she said.

Buckley said, “It’s a full-service experience for our guests. All they need to do is choose which sauce they want. Then they are handed a complete package, ready to go. We believe this is another product we can offer to meet the huge consumer demand for hot chicken snacks.”

Year-over-year dining studies show that snacking and all-day dining continue to grow, particularly among Millennials born between 1980 and 2000. In a 2013 study by The Culinary Visions Panel, 30 percent of the respondents say they are snacking even more than they did a year ago, and late afternoon is prime time for snack attacks. Value drives snackers’ food choices, with 70 percent citing value as very important in their decision-making.

7-Eleven began addressing this growing hunger for minis, bits and bites with the successful launch of Mini Tacos in 2012 and subsequent addition of Mozzarella Sticks and Breakfast Empanada Bites last year.

Even better for 7-Eleven, not only is this teen-to-30 group big on snacking, Millennials also shop convenience stores more often than other demographic. Almost 75 percent of them stop at a convenience store at least once a week, reports the 2014 Realities of the Aisle study by Convenience Store News.

“Millennials don’t observe a three-meal-a-day schedule, but rather consume a mix of meals, snacks and mini-meals throughout the day as does the generation behind them,” Buckley said. “They are busy as kids, and life has gotten no less hectic for them as adults. Kids, teens and 20-somethings are the biggest snackers. Our menu has been evolving to include higher quality, value-priced smaller portions, mini-sizes and snacks that appeal not only to Millennials, but also kids and women as well.”

While studies may indicate they do more of it, Millennials don’t have a corner on snacking. A 2010 study published in The Journal of Nutrition said that 97 percent of Americans reported eating snacks, with nearly a quarter of the daily calories coming from food not eaten at one of the day’s three main meals, more than double what it was in 1970. The percentage of calories derived from snacks in the American diet rose two-fold between the late 1970s and 2010, according to analysis of National Health and Nutrition Examination Surveys data.

About 7-Eleven, Inc.
7-Eleven, Inc. is the premier name and largest chain in the convenience retailing industry. Based in Dallas, Texas, 7-Eleven operates, franchises or licenses more than 10,300 7-Eleven® stores in North America. Globally, there are some 52,500 7-Eleven stores in 16 countries. During 2012, 7-Eleven stores generated total worldwide sales close to $84.5 billion. 7-Eleven has been honored by a number of companies and organizations recently. Accolades include: #2 on Franchise Times Top 200 Franchise Companies for 2013; #3 spot on Entrepreneur magazine’s Franchise 500 list for 2012, and #3 in Forbes magazine’s Top 20 Franchises to Start. 7-Eleven is No. 3 on Fast Company magazine’s 2013 list of the “World’s Top 10 Most Innovative Companies in Retail” and among the Top Veteran-Friendly Companies for 2013 by U.S. Veterans Magazine and on GI Jobs magazine’s Top 100 Military Friendly Employers for 2014. Hispanic Magazine named 7-Eleven among its Hispanic Corporate Top 100 Companies that provide the most opportunities to Hispanics. 7-Eleven is franchising its stores in the U.S. and expanding through organic growth, acquisitions and its Business Conversion Program. Find out more online at www.7-Eleven.com. 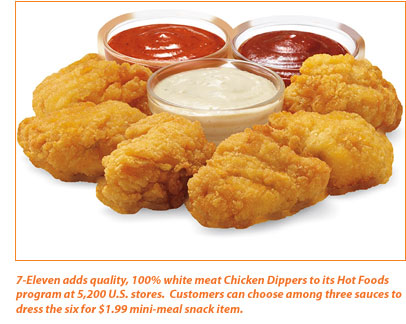