Wetaskiwin, Alberta, 2014-4-25 — /EPR Retail News/ — It took less than 48 hours. By 8 a.m. Wednesday morning, the transformation was well under way and Wetaskiwin Co-op welcomed customers into its new food store.

After receiving the keys to a former Sobeys grocery store at 12:01 a.m. on Tuesday, an incredible effort was made to re-stock shelves, install a new point-of-sale system and change signs to reflect the new Co-op brand.

“It looks better. It’s so nice and bright,” said Muriel Hay, one of the first customers in the store and a long-time Co-op member. “You want quality and that’s number one to me. And the staff is really friendly here.”

This is the first of 14 food stores to be opened by the Co-operative Retailing System in the next month after Federated Co-operatives Limited acquired the stores from Sobeys Inc. in February.

Planning the transitions has spanned months, involving a significant number of people and countless emails, phone calls and meetings.

“A limitation is we do all the planning and you don’t know how well-prepared you are until you get into it,” said Wetaskiwin Co-op General Manager Al Halter.  “I think we’ve shown over the last 24 hours that we were very well prepared.”

Halter said getting back into the grocery business is a great opportunity and something the 97-year-old organization has been looking into for the past five years. It offers the opportunity to reach city residents, who may see the Co-op as only a farm store, and showcases the Co-op brand and standard across all commodities.

“I think they’ll be dealing with happier employees. I think they’ll see a much higher standard of operation, cleanliness and merchandising,” he said. “It’s just a matter of paying attention to detail. We’re going to offer a great value for the shopping experience.”

Brian White is one of those employees who has been in the thick of things over the past two months. Of the past 24 hours, he said there have been challenges.

“It’s been a learning curve,” said the grocery department manager. “It’s been stressful, but it’s also been enjoyable because it’s new.”

He feels Co-op sees him as a multi-faceted individual and “the possibilities for forwarding my career have opened up endlessly.”

Renovations are expected to continue until the end of May.

For information about other store openings, visit www.myco-op.ca. 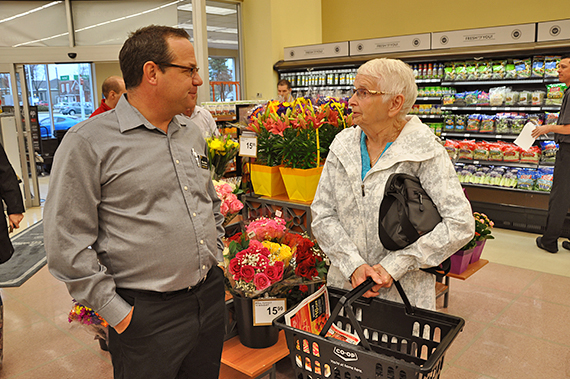