Winnipeg, Canada, 2014-5-23 — /EPR Retail News/ — Red River Co-op customers will be able to get a fresh cut of meat just in time for barbecue season.

General Manager Doug Wiebe said this is a unique offering, with many grocery stores now choosing to bring in meat that has been vacuum packed or gassed for a longer shelf life.

“This is actual product that has been cut in store by an individual versus on a production line,” he said. “It gives the opportunity to offer special cuts to individuals if they want a thicker steak or different sized roast.”

Because of this, Red River Co-op recruited employees to cut and wrap meat from seven positions were filled internally with another nine hired from external candidates.

These 16 employees are part of the 450 employees that will be retained as the four new Co-op food stores open. The Main Street location opened May 14 and Southdale opened May 15. While the new St. Vital opened yesterday, the new Grant Park store opened today, with a gas bar opening in St. Vital on May 26.

The transition is a large project, involving many people and having a significant impact on the Winnipeg economy.

“The total capital expenditures we have in our feasibility is $3.3 million…for the first 12-month cycle,” Wiebe said. “That includes all the rebranding of the stores, the renovations and adding new equipment.”

Wiebe added there were 320 Co-op employees, vendors and contractors on site at the Southdale location Wednesday. 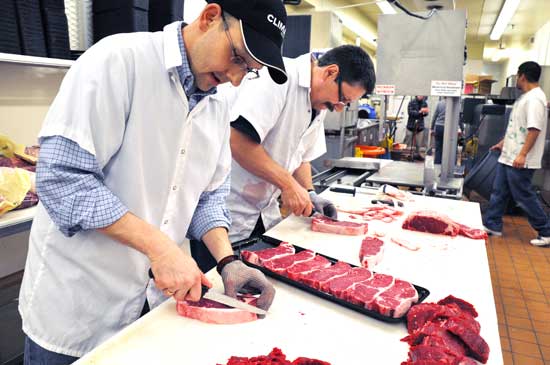