Dallas, 2014-9-3 — /EPR Retail News/ — 7‑Eleven, Inc., the first national retailer to offer fresh-brewed coffee in to-go cups, celebrates 50 years of on-the-go coffee with 50-cent coffee from Sept. 3 through Sept. 14. During this time, a small-size coffee will cost just 50 cents at participating 7‑Eleven® stores. At the same time, the retailer will kick off an “Every 7th Cup Free” coffee-rewards program through its 7‑Eleven mobile app.

To participate in 7‑Eleven’s new coffee loyalty program, customers must download the app in the iTunes App Store or Google Play and register as a member. Texting “BREW” to 711711 will also send a link to download. Clicking the dollar icon at the top of the app’s home screen takes the member to the coupon page, where the member’s personal bar code and digital coffee punch card reside.

Every time a customer purchases any size cup of coffee, the cashier will scan the member’s bar code in the app, which will automatically punch the digital rewards card. Each purchase earns a punch that shows up as a star icon in the app. After receiving six punches, or stars, a coupon for a free medium coffee will appear in the app. The punch card process starts over once the free coffee coupon is redeemed.

“You’ve heard of a baker’s dozen, 13 for the price of 12,” said Nancy Smith, senior vice president of fresh foods and proprietary beverages. “Consider this a brewer’s half-dozen, seven cups of coffee for the price of six. Many of our coffee customers are regulars, so they could earn a free medium cup as often as once a week, or more if they come in more than once a day. This offer is actually more generous than a baker’s dozen — 14 cups for the price of 12. ”

Before 1964, U.S. coffee-drinkers enjoyed their java either at home or while seated at a restaurant. That’s when a new 7‑Eleven franchisee, looking for creative, everyday conveniences to offer his customers, began selling coffee by the cup in his Long Island store. The test proved wildly popular, and by the late 1960s, all U.S. 7‑Eleven stores were in the brew. Today, 7‑Eleven sells more than a million cups each day, and coffee in to-go cups, whether disposable or refillable, is an everyday sight, not just in the U.S., but also around the world.

“I’m not sure people realize that 7‑Eleven was the first company in the U.S. to sell coffee to go, or that today we rank fourth in fresh-brewed coffee sales in the U.S.,” Smith said. “Since we began offering fresh-brewed coffee 50 years ago, it has been one of our customers’ favorite items. So, we want to celebrate 50 years by saying ‘thank-you’ to our millions of 7‑Eleven coffee-lovers.”

Coffee, 7‑Eleven stores’ first venture into serve-yourself beverages, was an instant – make that fresh-brewed – success. Customers liked the opportunity to prepare their coffee the way they wanted it – choosing cup size, regular or decaffeinated coffee, and adding sweeteners and creamers to suit their tastes.

All coffee blends are made from 100 percent Arabica beans and custom roasted for 7‑Eleven. Quality checks along the entire process of sourcing and roasting ensure a high-quality product. A typical store will serve several varieties all day long and can brew a fresh batch at a customer’s request any time of day.

“We provide all the ingredients to create your favorite coffee drink,” Smith said. “And unlike most purveyors of coffee beverages, a cup of 7‑Eleven coffee costs the same, regardless of how one chooses to customize their cup.”

While coffee consumption in the United States is second only to water, coffee consistently scores as the top-selling, self-serve beverage at 7‑Eleven stores. To spice things up, a favorite seasonal flavor is back for the fall. In September, 7‑Eleven stores will offer Pumpkin Spice Coffee, along with a Pumpkin Spice Latte, International Delight creamer and syrup.

“We know our customers love pumpkin spice, now they can have it as a flavored coffee or latte, add Pumpkin Spice creamer and syrup to their favorite 7‑Eleven coffee, or pour all four in one cup!” Smith said.

About 7‑Eleven, Inc.
7‑Eleven, Inc. is the premier name and largest chain in the convenience retailing industry. Based in Dallas, Texas,7‑Eleven operates, franchises or licenses more than 10,300 7‑Eleven® stores in North America. Globally, more than 53,500 7‑Eleven stores operate in 16 countries. During 2013, 7‑Eleven stores generated total worldwide sales close to $84.5 billion. 7‑Eleven has been honored by a number of companies and organizations recently. Accolades include: #2 on Franchise Times Top 200 Franchise Companies for 2013; #3 spot on Entrepreneur magazine’s Franchise 500 list for 2012, and #3 in Forbes magazine’s Top 20 Franchises to Start. 7‑Eleven is No. 3 on Fast Company magazine’s 2013 list of the “World’s Top 10 Most Innovative Companies in Retail” and among the Top Veteran-Friendly Companies for 2013 by U.S. Veterans Magazine and on GI Jobs magazine’s Top 100 Military Friendly Employers for 2014. Hispanic Magazine named 7‑Eleven among its Hispanic Corporate Top 100 Companies that provide the most opportunities to Hispanics. 7‑Eleven is franchising its stores in the U.S. and expanding through organic growth, acquisitions and its Business Conversion Program. Find out more online at www.7‑Eleven.com.Contact: 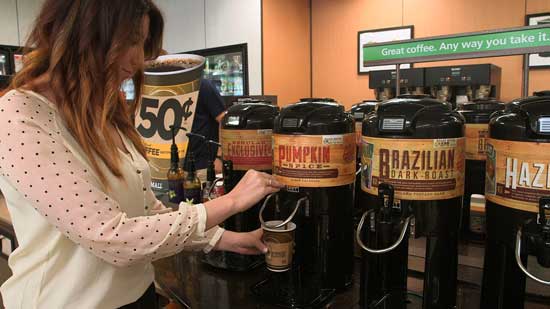 7‑Eleven brings back its popular coffee flavor, Pumpkin Spice, in time for the company’s 50th anniversary of selling on-the-go coffee. The celebration includes 50 cents for a small cup, and buy six cups, get one free small size Sept. 3-14 through 7‑Eleven’s digital loyalty card available on its mobile app. 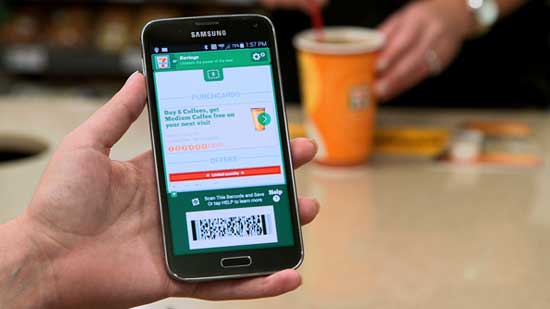 As part of 7‑Eleven’s 50th anniversary of selling on-the-go coffee, customers can get every 7th cup of coffee free Sept. 3-14 through the retailer’s mobile app.