The community retailer today (Wednesday, 8 October) pledged to reinvest profits from its entire carrier bag range, and not just the 5p charge on single-use carrier bags, to good causes.

The Co-operative Food expects the move will raise as much as £750,000 in the next 12 months, and all the money will be reinvested in community projects across Scotland.

From Monday, 20 October, all retailers are required to charge customers 5p for single-use plastic bags.

But as well as the statutory charge, The Co-operative Food will add the money it makes on the sales of its new woven reusable large shopping bag, a new woven reusable small shopping bag (which doubles as a bottle bag) and new fold-away bags (all available for £1 each), as well as its redesigned 10p bag for life, and its compostable carriers (6p each and available from stores in locations where local councils have food waste collections requiring compostable bin liners).

John McNeill, Regional Stores Director for The Co-operative Food in Scotland, said: “We’re getting carried away with carrier bags, and it’ll mean bags more money for communities the length and breadth of Scotland. By going much further than we need to we’ll raise hundreds of thousands of pounds extra for good causes.

“It’s not just a commitment to local communities though, we also have a strong commitment to the environment and we share the aspiration of reducing the number of single use carrier bags that are distributed. By buying any of our range of carriers, customers will be contributing to the environment, as well as to good causes. Together we will reduce, reuse, recycle and reinvest in our communities.”

The Co-operative Food will confirm which good causes can bid for the funding, and how they can apply, early in 2015.

The 5p single-use carrier bag charge is introduced from Monday, 20 October, but The Co-operative Food’s new range of reusable carriers go into its Scottish stores from today (Wednesday, 8 October) meaning customers can begin raising money for good causes straight away.

*Further information on The Co-operative Food’s carrier bag recycling policies can be found at www.co-operativefood.co.uk/carrier-bags (link will be live from Weds 8 October)

The Co-operative Group is the UK’s largest co-operative business, whose purpose is “Championing a better way of doing business for you and your communities.” Owned by over eight million members, The Co-operative Group operates a total of 4,500 outlets, with around 87,000 employees and has an annual turnover of £11 billion with interests across food, funerals, insurance and legal services.

For more information about The Co-operative Food go to www.co-operativefood.co.uk 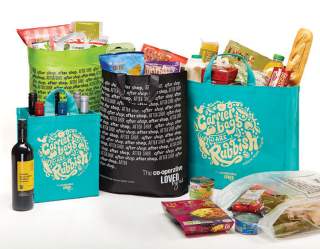