This UK media first supports Argos’ recently launched campaign ‘GET SET GO ARGOS’ which brings to life its ongoing drive to become a digital retail leader for everyone, enabling customers to shop how and when they want through initiatives such as Fast Track collection and free reservation online.  All media planning has been handled by Mindshare with creative execution by CHI & Partners.

The digital store’s audience and online viewers watched and took part in the Hangout, hosted by presenter Georgia LA. Guests and viewers were invited to share their thoughts on emerging British talent and new technologies impacting the music scene. It was hosted by a panel of music industry experts including, Luke O’Connor, SB.TV Label Manager, Drew Lam, label relations at Spotify, and up-and-coming music talent George Barnett.

Fresh from her MOBO nominations Katy B also gave an exclusive performance as part of the Hangout, playing a range of tracks includingPerfect Stranger, 5am, Katy On A Mission and Lights On.

Katy B was joined by George Barnett, a regular on online youth broadcast platform SB.TV, with over 300+ million YouTube views. George performed his latest tracks3 Statues, Reflection and Animal Keeper.

Katy B said: “It was too much fun performing last night at the Argos Digital Store! Shout out to the amazing audience and everyone who streamed at home, it’s the first time I’ve ever performed a live gig through YouTube!”

Stephen Vowles, Marketing Director at Argos, said: “We are really excited about our transformation and we want everybody to realise how much Argos is changing with our new campaign.  Music is an important theme in our campaign and we thought what better way to celebrate our transformation than by bringing a headline music artist like Katy B together with the opportunity for live social media interaction in the technology-led setting of one of our digital stores.  Being the first event of this kind streamed through the YouTube masthead, it’s another example of how we are continually innovating and repositioning our business as a digital retail leader.”

Laura Flewitt at Mindshare said: “We knew we needed to deliver a really joined up campaign with digital at its heart and by bringing together Argos’ brand, Google’s technology and Katy B’s talent we think we have a great demonstration of how Argos is inventing the future for retail.”

This week Argos will also launch a new, interactive element to its ‘GET SET GO ARGOS’ campaign – a digital out-of-home game allowing commuters at London Waterloo and Euston Stations to compete for hundreds of Argos prizes. Designed specifically for Motion@Waterloo, the game ‘Bubbles’ will mark the 40m screen’s first outing as a platform for real-time mobile interaction.

In October 2012, Argos announced a five-year transformation plan to reinvent itself as a digital retail leader: to transform Argos from a catalogue-led business to a digitally-led business.

About Argos
Argos is a leading UK digital retailer, offering around 43,000 products through www.argos.co.uk, its growing mobile channels, stores and over the telephone.

Argos continues to be the UK’s largest high street retailer online with around 123m customer transactions a year through its stores and 738 million website and app visits in the 12 months to February 2014.  Customers can take advantage of Argos’ convenient Check & Reserve service available through its network of 734 stores across the UK and Republic of Ireland.

In the financial year to February 2014, Argos sales were £4.1 billion and it employed some 29,000 people across the business. 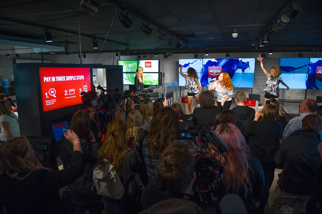