Milton Keynes, UK, 2015-3-18 — /EPR Retail News/ — Thousands of products are now being moved around the nation’s roads without a drop of diesel in sight thanks to five ground-breaking gas-powered Argos trucks.

Designed by Scania and complying with Euro 6, Europe’s latest clean exhaust emissions standard, the vehicles can run completely off biomethane gas, and release up to 70 per cent less carbon dioxide compared to their fuel counterparts.

David Landy, Argos Fleet Manager, said: “These trucks offer a glimpse into the future of the UK haulage industry, and as one the UK’s biggest retailers selling around 50,000 products, we’re delighted to be leading the way in getting products into our stores and customers’ hands in an environmentally friendly way.”

The new gas trucks can travel up to 350 kilometres without refuelling, and will be based at Argos’ distribution centre in Magna Park, Lutterworth.

Martin Hay, UK Truck Sales Director for Scania (Great Britain) Limited said: “We are delighted that Argos has become the first UK operator to put our dedicated gas-powered trucks into operation.  Today, there are approaching 4,000 gas-powered Scania vehicles in service around the world.  This, together with an ever-developing fuel-supply infrastructure, represents a major step forward in terms of combating emissions of greenhouse gas.”

The introduction into service of these vehicles also represents a major milestone in a project created by Innovate UK (formerly Technology Strategy Board) to assess the benefits of gas to the UK haulage industry.

“A key aim of the project has been to introduce gas-powered vehicles into service at Magna Park in the run-up to a publicly-accessible gas refuelling station scheduled to open on site later this year,” said John Baldwin, Managing Director of CNG Services, which leads the project in collaboration with Gasrec, Argos, DHL Supply Chain, Culina Logistics and Eddie Stobart.

“In our view, the introduction of Argos’s new gas-powered Scania trucks will be transformational in terms of carbon dioxide emissions and their impact upon air quality in the coming years.”

Argos continues to be the UK’s largest high street retailer online with around 123m customer transactions a year through its stores and 738 million website and app visits in the 12 months to February 2014.  Customers can take advantage of Argos’ convenient Check & Reserve service available through its network of 756 stores across the UK and Republic of Ireland.

In the financial year to February 2014, Argos sales were £4.1 billion and it employed some 29,000 people across the business. Argos is part of Home Retail Group, the UK’s leading home and general merchandise retailer.

Scania is a major supplier to UK industry of trucks, buses, coaches and engines for industrial and marine applications.  Additionally, the company provides a wide range of complementary and ancillary services in support of its products and customers through its 92-strong network of service centres.  In 2014, Scania’s share of the UK heavy truck market was 17.3% and its combined bus and coach market share amounted to 9.7%.

Based in Sweden and with production facilities in Europe and Latin America, Scania is a global organisation which markets its products in around 100 countries worldwide. 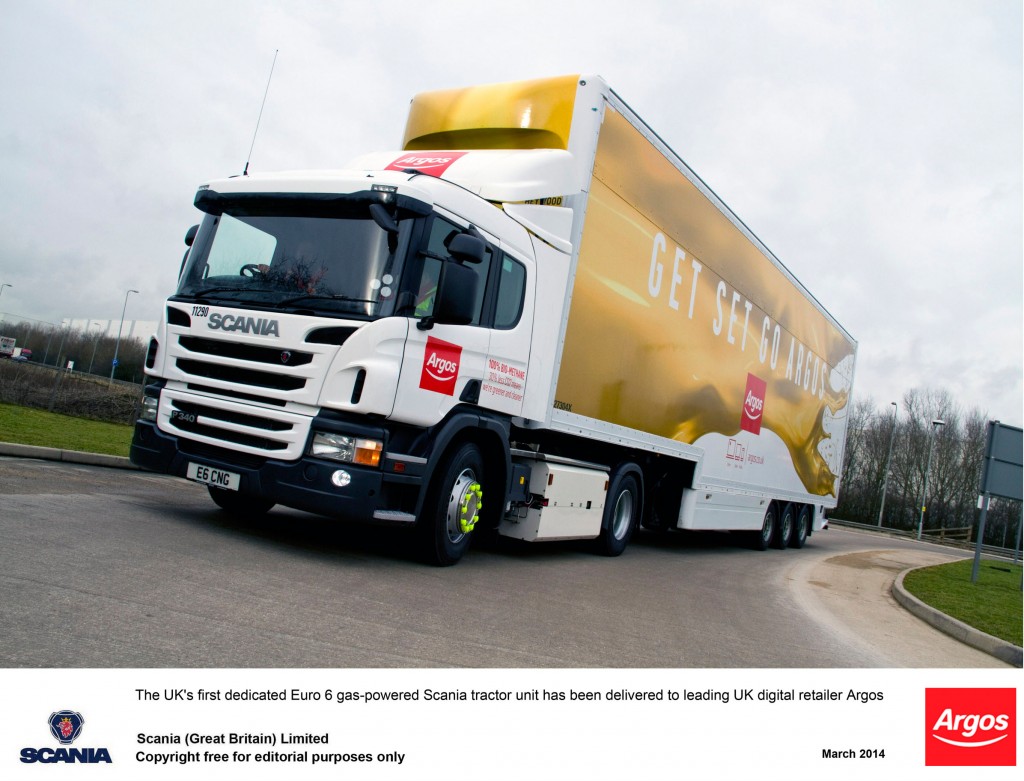