In Starbucks 10th forum to discuss racial inequality in America, dozens of partners (employees) shared their personal stories and expressed gratitude for the company’s willingness to hold conversations that foster better empathy and understanding of one another.

ATLANTA, 2015-4-22 — /EPR Retail News/ — An elderly white couple, who regularly visited a Colorado Starbucks store over the past few years, refused to be served by black baristas. They were raised during a time period in America when people of different races were segregated.

“What I love about our company is that we have the freedom to go beyond our counter, and step to the other side and sit down and have coffee with the white couple that did not accept me at first,” said a Starbucks partner (employee), who talked about breaking down stereotypes in a forum with her peers in Atlanta.

After sharing her upbringing with the couple and having regular conversations with them, she witnessed a significant change in their behavior. “Now they come in just to see me and bring me birthday cards,” she said.

Her story is one of the hundreds that have been shared across the U.S. with Starbucks partners in meetings called Partner Open Forums – employee gatherings to discuss topics relevant to the company’s business. Starbucks chairman and ceo Howard Schultz initiated the first Partner Open Forum discussing racial tension in America on December 10, 2014. He has led similar conversations in Oakland, St. Louis, New York, Los Angeles, Chicago, Houston, Milwaukee, and most recently in Atlanta to discuss what he calls the “tragic injustice” of racial inequality.

“This issue, above all else, is the social challenge of America,” Schultz said. “When we are witnessing something that we know is wrong with the country – wrong with humanity – we can do something about it.”

For Schultz, the issue is personal.

“I grew up in the projects in federally subsidized housing. I knew what it was like then, and I know what it’s like now to feel the shame and vulnerability and the scars of a poor kid and what it was like to look over the train tracks and see others who have more and realize that for whatever reason our station in life was not like theirs,” Schultz told partners.

He described how his life changed, “through the grace of God” despite odds that were “beyond comprehension,” because he believed in the American dream. The American dream, he said, has to be available for everyone.

“I promise you we are going to do everything we can as a company to continue the conversation, and to fight for the people whose voices are not being heard,” said Schultz.

In Atlanta, dozens of partners shared personal experiences. Many partners tearfully talked about beliefs they were raised with and are trying to change. They also expressed gratitude for Starbucks willingness to hold conversations that foster better empathy and understanding of one another.

“From the day that I started to this very day, I have one word that resonates through me and it is ‘home,'” said one partner. “I take pride in the fact that I work for a company who makes such strides in society. It knocks on the door that no one wants to knock on; touches the topic that no one wants to speak on.”

Starbucks will hold several additional Partner Open Forums in cities across the U.S. in the months ahead. 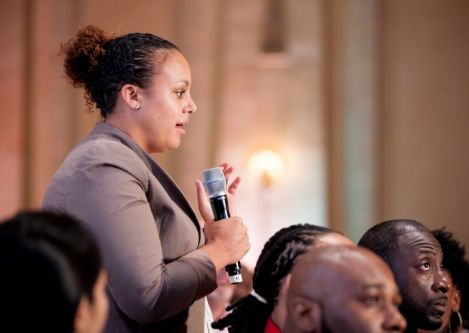