Carnaxide, Portugal, 2015-6-11 — /EPR Retail News/ — The Alegro Setubal shopping center, whose renovation-extension was inaugurated in November 2014 in Portugal, was rewarded in the “Reputation and brand positioning” category for its “Art everywhere” project.

The International Council of Shopping Centers awards reward, since their creation in 1972, excellence in marketing in commercial real estate. More thanj 230 applications from 25 different countries were submittes this year.

If the Portuguese Alegro Setubal shopping centre has managed to do well out of the game, it’s because it carries the dynamics of an entire community of committed citizens and artists. Thus, during the 20 months of work, they went through an exceptional artistic adventure.

Under the « Arte em toda a parte* » slogan, a relationship of complicity between the shopping centre and inhabitants was born of a consistent approach of art promotion around 8 works of art of high quality.

Construction materials built into works of art, a dolphin statue created from waste collected at sea, the faces of some 30 inhabitants, a mural fresco, realized by Sergio Odeith and elected by the « I Support Street Art » movement as one of the 24 most beautiful frescos painted in the world in 2014…

Most artistic works created are now full part of the common good and are permanently installed, either in town or in the shopping centre. 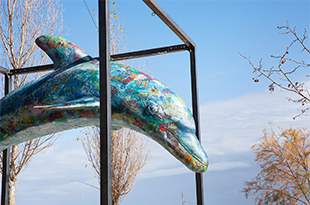