As the two teams lined up for a field goal attempt, capping yet another stalled Seahawk drive, the behemoth lineman was positioned to take on the outside rush. Though technically an eligible receiver, the Seahawks presented a standard formation and Gilliam fit the rather substantial profile of a blocker whose sole role was to protect the edge. At the snap of the ball, however, the 6-5, 306 pound Gilliam slipped through a napping special-teams unit and caught a pass as he crossed the goal line, putting the first Seahawks points on the board in a 28-22 comeback victory that propelled Seattle to the Super Bowl.

As a deafening roar rose up through Century Link Stadium, the Packers had to be pondering, “That guy did that?” But they were just learning what many already know: Garry Gilliam’s talents extend far beyond protecting quarterbacks and opening holes for runners.

Players and Partners Team Up

Touring Starbucks headquarters in Seattle as part of the Seahawks job shadow program, Gilliam comes across as a man whose interests are as broad as his shoulders. For the 24-year-old Pennsylvanian and Seahawks teammates Kevin Pierre-Louis, Marcus Burley, Mike Morgan and Julius Warmsley, the program aims to bolster post-gridiron prospects by providing guidance, education and support on the job front as well as a chance interact with Starbucks partners (employees) and the community.

Gilliam spent time this week with members of the Starbucks Global Communications, Global Digital Marketing and Partner Communications & Engagement teams.  Gilliam has always been adept at learning new things, having overcome an underprivileged background to flourish as a student and athlete.

A native of Harrisburg, Pennsylvania, his mother enrolled him in the Milton Hershey School when he was 7 years old. The school offers top-notch education to students from income-eligible families. While only a short drive from home, Milton Hershey School students live on campus in student housing during the school year. The bright second-grader was catching a break academically at the private school, but it meant living away from his mother and siblings.

“No one had graduated from school from my family at that point,” Gilliam recalled. “It was unchartered territory, so why not? It was tough, obviously, being away from home at such a young age. I remember crying a lot – like every night.”

Over time he found one way to fend off the blues was to keep busy. “The more I was involved the less I thought about not being at home,” said Gilliam. “I got involved in choir and band and acting and dance and a bunch of sports. I was always intelligent and always had a yearning to learn.”

By the time he’d received his high school diploma from Milton Hershey, Gilliam had accumulated a slew of honors on the field and in the classroom. He was recruited by Penn State University, making his mark initially as a tight end before switching to offensive tackle. He received degrees in advertising, business and psychology and earned a spot on the Academic All-Big Ten team.

His progress as a player, however, was marred by injuries, so when he finished his career as a Nittany Lion after the 2012 season, teams passed on him through the seven rounds of the NFL draft. His potential, as well as his diligence and background, caught the attention of the Seahawks, who signed him as a free agent in the spring of 2014. Against long odds, he made the 53-man roster and was on the field when the Hawks fell just short in defending their Super Bowl title.

Despite his unexpected moment of NFL glory, Gilliam is the pragmatic sort. Asked what he sees in his future, he replied “Play football.” Laughing he added: “In a perfect world, obviously, you want to play football long enough so you have enough money so you don’t have to work again. I can see myself being a serial entrepreneur.  Set up a few businesses and see how far I can take them.”

Gilliam believes that too few players put enough thought into what comes after their athletic careers end. “You can see it in the numbers,” he said. “About 90 percent of NFL players are bankrupt within two years of being out of football. They’re trying to live a lifestyle they no longer can support.”

Wanting a solid future is a big reason why he decided to participate in the Seahawks job shadow at Starbucks. He also wants a better future for children at Milton Hershey School. Gilliam regularly finds time to go back to the school.  “Every chance I get, I go back and talk to kids about embracing opportunity.”

Just like he did when it was fourth and long against the Packers. 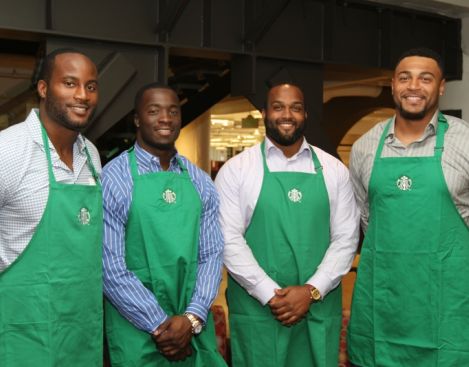