The aging building on Seattle’s Capitol Hill, built nearly a century ago, was once a showroom for luxury automobiles and the crown jewel of the city’s auto row. The grand dealership, closed during the Depression, was home to an auto parts dealer during the 1940s-60s, and reverted back to a dealership again in the 1970s. By the 2000s it became a quirky retail space with a haphazard drywall partitions and layers of dated finishes.

Two years later, the 15,000 square-foot space reopened as the first Starbucks Reserve® Roastery & Tasting Room the site of the old Packard Showroom transformed to a one-of-a-kind tribute to coffee.Historic Seattle, a nonprofit dedicated to preserving the city’s architectural legacy, awarded Starbucks its Best Adaptive Reuse Award for 2015 for its outstanding achievement in bringing the building back to life.

“People had ignored this space for a long time,” said Eugenia Woo, Director of Preservation Services for Historic Seattle. “Starbucks did a fantastic job of maintaining the original features of the building while updating it to make it something that shines.”

Starbucks maintained the original look of the exterior by restoring the ornate brick masonry exterior and its white terra cotta cladding – adding a nod to Starbucks heritage by replacing the blue mosaic tile inset into the arch above the entrance with a sculpted siren figure.” The showroom’s large window bays fill the space with light and connect customers to the hustle and bustle of the neighborhood outside. A more than 15-foot version of the Starbucks Reserve® logo stands high on the rooftop where the Packard neon once glowed.

Inside the Roastery, just nine blocks from the original Starbucks® store in Seattle’s Pike Place Market, thousands of visitors each week now walk across the original terrazzo and concrete floor. Original heavy wood timbers soar to the 18-20-foot ceilings in the open floor plan that now houses coffee roasters, retail areas, a spacious café and a restaurant. Reclaimed materials, including wood from the decorative ceiling, mingle with the gleaming hand-hammered copper coffee silo.

“Now when you walk inside the Roastery, you can still see the patina of age and see how solidly it was built with heavy timbers,” Woo said. “But at the same time you can see how it’s updated with rich materials and wood, really embracing the original features and enhancing them.”

“Crowds come to the Roastery from all over the world,” Gale said. “To have the Roastery in a historic location – reminiscent of the original Pike Place store – really takes you emotionally to the next level.”

Our Love Affair with Coffee Knows No Bounds 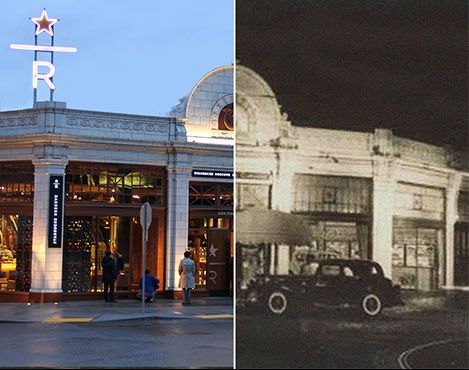