SETTLE, 2015-9-22 — /EPR Retail News/ — Adam Brotman loves a good success story. Ask him what he does when he’s not immersed in Starbucks core digital businesses and Brotman will tick off a list of biographies of entrepreneurs he’s recently polished off and then point to a stack of nonfiction hardcovers that are up next.

Reading about groundbreaking business leaders ranging from Steve Jobs and Bill Gates to his current boss, Howard Schultz, and his uncle, Costco co-founder Jeffrey Brotman, is nothing new for Starbucks chief digital officer, who recalls consuming similar fare alongside comic books when he was a boy.

The Northwest native has written a new chapter in his own success story with Starbucks recent expansion of Mobile Order & Pay. The service, which allows customers to buy customized food and beverages from their phone before they arrive at a Starbucks® store, was introduced in Portland in late 2014. In June of 2015, Starbucks expanded the program to 3,400 additional stores across 17 states. Today the service expands to all company-owned U.S. stores ahead of schedule.

Brotman, who also oversees all of mobile, web, card, digital loyalty experiences, Wi-Fi and much of the in-store digital products used by partners (employees), joined Starbucks in 2009 as senior vice president and general manager of Digital Ventures. He’d previously served as CEO of Barefoot Yoga Company and Senior Vice President for Corbis. He founded the in-store service PlayNetwork in 1996 after completing his studies at the University of Washington School of Law the previous year.

Brotman discusses his career, and the challenges ahead, in this Starbucks Newsroom Q&A:

You’re a Seattle native. Do you recall the first time you encountered Starbucks?

The first time I encountered Starbucks, ironically, wasn’t in Seattle. I went to college in Los Angeles at UCLA. I was familiar with Starbucks from before I left for college in 1987, probably from the original Starbucks and perhaps from some of what had happened after Howard merged Il Giornale with Starbucks. My uncle was one of the early investors and board members too, but really my awareness was just out of the corner of my eye. During the time I was in college, the company began to open some stores in L.A. I remember feeling hometown pride – this is that cool Seattle coffee shop. It had been around for a while in terms of the original concept, but it was relatively new in the mid- to late-‘80s, in terms of expansion. I started going there when I was in college.

I came back to Seattle in 1992 to go to law school and, by that point, Starbucks had just gone public. I remember thinking: This whole town is bonkers for Starbucks and double-tall lattes. I was just a brewed drinker and I began to drink lattes because I needed to get in the cool-kid crowd. I became a rabid Starbucks customer during law school from 1992 to 1995.

You received your bachelor’s degree from UCLA in classical civilizations. Are there things you learned from the Greeks and the Romans that apply to your business career?

I think Greek and Roman history, philosophy and art were the perfect canvas for a liberal arts education. It’s history, it’s literature, it’s poetry, it’s art, it’s philosophy. Those are things that are great to write about. It hones your writing and thinking skills. It helps you with business creativity as well.

This is true of a lot of liberal arts education. It teaches you to look at something that’s somewhat esoteric or somewhat abstract from daily life, but you can relate it to your daily life. And then write about it. Those skills help with problem solving and creative thinking.

After receiving your law degree, your career took a different path. Did you intend to be a lawyer?

I went into the study of law specifically with an objective to have it help me with business, which is rare. Most people go to law school to become a lawyer. In my case, I had a three-step path. Luckily, my uncle [Jeffrey Brotman] went to University of Washington law school, then had a law career and then started Costco. He mentored me on this idea that law school is an amazing opportunity for young people – or frankly people of any age – to learn to think like a lawyer.

That is similar to what I just mentioned about my liberal arts education. By focusing on business law, at an early age in your legal career you could have access to board rooms and CEOs and CFOs in a way that no one else could at that stage in their legal career. Because you’re not a litigator; you’re a business lawyer. And business lawyers, particularly 20 years ago, were a rarity.

There was no track for business law at law school, so if you took it upon yourself to become a business lawyer you could become part of this small group going to boardrooms. And if you want to go into business, you want to have access to boardrooms so that you can learn and watch and operate on that playground.

To my uncle’s annoyance, I quit my law practice after two years, got the entrepreneurial bug and started PlayNetwork. I think the grand plan was for me to practice law for another five years. Probably in hindsight I should have. But my entrepreneurial passion overtook my career logic.

As chief digital officer for Starbucks and CDO Club’s U.S. Chief Digital Officer of the Year, you’re the tip of the tech spear for an innovative company. Have you always been an early technology adopter?

I have been, although honestly I wouldn’t describe myself that way. But when others now see what I’ve done from starting PlayNetwork to being involved at Corbis and now getting involved here as chief digital officer, they tell me they remember me from junior high school and high school always having the first version of the computer – whether it was an Atari system or a Commodore computer when I was a kid. They remind me that when it came to digital music, I was the very first person anyone knew who had a CD player. I never coded anything in my life, outside of those classes in school, so I’m not a technologist. I’m a digital guy.

It took a year of intense work before we even launched it amongst a tight-knit group of different functions. This is core to operations now. We designed Mobile Order & Pay to be seamlessly integrated into the operational flow, for both the partners in the store and the customers in the store. But also for how the production engine works. How the hand-off plane works (where customers pick up their orders). How the routines for the partners work.

We designed it from day one with the goal of making this a seamlessly integrated feature set and platform, much like we did with drive-thru, as a company. We had to have Operations be a key partner to this core of different functions that came together to work on this. What surprised me the most was how similarly operators in our company and the digital team think.  It was fascinating.

Both teams, I think, are very entrepreneurial. Both teams are extremely customer-centric and thought, “Let’s not engineer this in a way to make it the way we want it. Let’s think of the customer experience first, and the partner experience is part of that. Don’t let the tail wag the dog.” I think the operators found a long-lost cousin in Digital.

The program would not be the success it is today if there wasn’t that partnership between those two groups. It was not a matter of just some master plan and everyone got onboard. It was co-created by a number of different groups: the Technology group, the Operations group, the Digital group, the Marketing group, the Loyalty group. We all got in a room and designed it together and the partnership was great.

You emphasize learning as a key component of what you do in the digital realm. Who are your teachers?

I learn a lot from what other consumer-facing digital companies are doing, particularly out of Silicon Valley. What is Jack Dorsey doing with Square and Twitter? What is Mark Zuckerberg doing with Facebook? I look at apps and think about what Starbucks can do to enhance our relationship with our customers – as opposed to what other retailers or other restaurant companies are doing.

When was the last time you were totally unreachable by phone or computer?

That’s a hard one. I remember once telling everyone that I’m not going to be reachable for a week and I’m really going to try to unplug. But that was a couple of years ago, to be honest. I should probably do it more often. 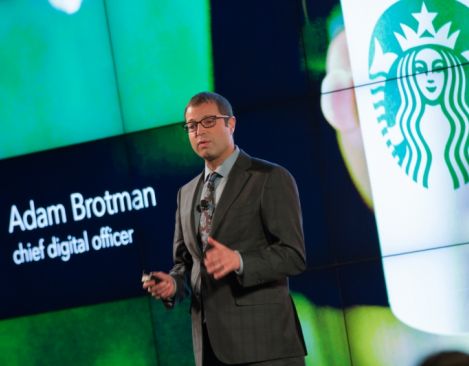