WASHINGTON, 2015-12-1 — /EPR Retail News/ — Holiday shoppers were on their feet and online early over the Thanksgiving weekend as millions of people grabbed their friends and family and made the trek to their favorite stores, or sat down with their lists ready for some serious online shopping.

According to the National Retail Federation’s Thanksgiving Weekend Survey conducted by Prosper Insights & Analytics, more than 151 million people said they shopped either in stores and/or online over the weekend. This compares to the 136 million, who in a mid-November survey, said they planned to shop over the weekend. Specifically, nearly 102 million people say they shopped in stores over the Thanksgiving weekend, and more than 103 million say they shopped online.

Average spending per person over the weekend totaled $299.60*, with an average of $229.56 specifically going towards gifts, or 76.6 percent of total purchases (*NRF’s 2015 Thanksgiving weekend survey, including the spending amount, is not comparable to last year’s survey as the methodology has changed). Those under 35 were most likely to shop over the weekend. Specifically, 25-34 year olds spent an average of $425.08 on all holiday purchases, with 69.3 percent of that going towards gifts ($294.44).

Additionally, as of November 28, 77.6 percent of those polled said they had at least started their holiday shopping.

“We recognize the Thanksgiving weekend shopping experience is much different than it used to be as just as many people want that unique, exclusive online deal as they do that in-store promotion,” said NRF President and CEO Matthew Shay. “It is clear that the age-old holiday tradition of heading out to stores with family and friends is now equally matched in the new tradition of looking online for holiday savings opportunities.

“Retail is in the middle of an incredible revolution and evolution. As a result, NRF evolved what we have traditionally done in terms of examining the holiday weekend shopper to reflect these changing times. As the shopping environment changes so too must our analysis of it,” continued Shay.

It is clear holiday shoppers were in the mood to find great online deals, too. Among digital bargain hunters, the survey found 41 million people (39.8%) said they shopped online on Thanksgiving Day and 75.3 million (73.1%) shopped online on Black Friday. 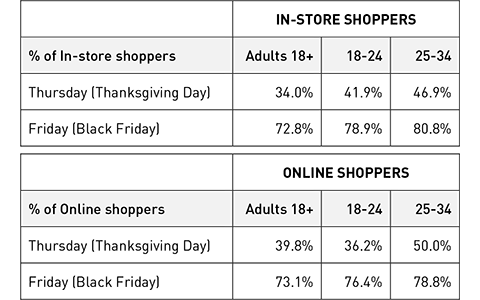 “Holiday shopping started well in advance of Thanksgiving weekend this year, but there’s no question that people were still incredibly eager to get their hands on the deals that retailers were offering on electronics, apparel, toys and even small appliances,” said Prosper’s Principal Analyst Pam Goodfellow. “The ease of online shopping through mobile devices now lets millions of people research what they want as well as make timely purchases any day of the weekend – a win-win for both retailers and shoppers.”

“Millennials have changed the game when it comes to Thanksgiving weekend shopping, making sure they were out early and often over the entire weekend in order to tackle their gift lists as well as their self-gifting lists,” continued Goodfellow.

WHEN AND WHERE PEOPLE SHOPPED
When it comes to when people showed up to shop on Thanksgiving Day, the survey found nearly half (49.2%) said they arrived at the store at or before midnight to begin shopping. That number jumps to 61.1 percent for 18-24 year olds and 60.2 percent for 25-34 year olds.

Smartphone and tablet devices served as their own channel for holiday shoppers this year. According to the survey, 56.7 percent of smartphone owners used their phone to research products, purchase holiday items, check in-store availability and other mobile shopping activities; 57.7 percent of tablet owners used their device to browse holiday deals and purchase items.

Additional survey findings for both in-store and online shoppers:

About the survey
*NRF’s 2015 Thanksgiving Weekend Survey is not comparable to the 2014 results survey. The methodology in our questions for when, where and how peopleshopped as well as what they spent is different from 2014, making this year’s data not comparable.

The survey, conducted November 27-28, 2015 by Prosper Insights & Analytics for NRF, polled 4,281 consumers and has a margin of error of plus or minus 1.5 percentage points.

Prosper Insights and Analytics delivers executives timely, consumer-centric insights from multiple sources. As a comprehensive resource of information, Prosper represents the voice of the consumer and provides knowledge to marketers regarding consumer views on the economy, personal finance, retail, lifestyle, media and domestic and world issues.www.ProsperDiscovery.com.