The new store will have a surface area of 2,500 m2 and is located on the mythical Las Ramblas in Barcelona

Barcelona, 2015-12-28 — /EPR Retail News/ — This weekend, MANGO will open its largest store in Spain. The store will be located in the heart of Barcelona, at number 132 Las Ramblas.

The new store will have a selling space of over 2,500 m2, distributed over 5 floors. It will sell all the company’s lines: Woman, Man and Kids.

The store, which represents an investment of 25 million euros for the Spanish fashion chain, will create 60 new jobs. This opening is part of the process of transforming the retail chain initiated in 2013 with the opening of megastores: stores with a selling space of 800 m2 or more that stock all or most of the company’s lines. Since then, the firm has opened over 150 megastores worldwide.

Daniel López, Vice-Chairman of MANGO and Expansion Director, commented: For MANGO it is a great honour to open such a special store, after 2 years of refurbishment works, in such an emblematic building located in the tourist centre of Barcelona. This project is part of the strategy to open stores adopting the megastore concept in prime locations in Spain, in addition to the recent projects in Corso Vittorio Emanuele, Milan and in Victoria Street, London.

MANGO opened its first store on Barcelona’s Passeig de Gràcia in 1984, and now has over 2,700 stores in 108 countries. MANGO closed the 2014 financial year with a Consolidated Group turnover for the MANGO-MNG Holding of 2.017 billion euros, representing a 9% increase on 2013, and an EBITDA of 223 million euros. 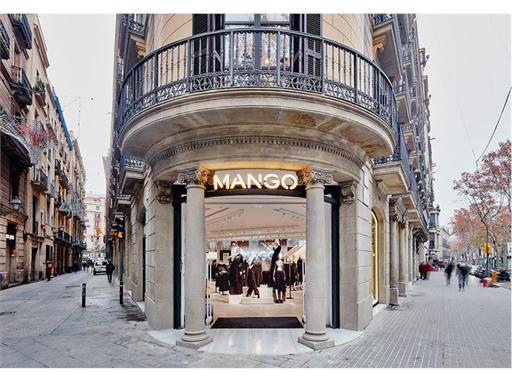