IRVING, 2016-Feb-25 — /EPR Retail News/ — Ladies and gentlemen of the press and social mediasphere, a proclamation from 7‑Eleven, who has provided Americans a hot dog standard based on freedom of choice since the 1970’s:

WHEREAS, we’re not about to let any King threaten that juicy, American liberty by limiting the people to just two pre-determined menu options; and

WHEREAS, 7‑Eleven has provided Americans the highest standard and best taste1 in hot doggery for more than 40 years, resulting in annual sales of over 80 million at over 7,900 stores; and

WHEREAS, this monarch has the audacity to tell Americans how much chili and other toppings we can put on our hot dogs – and during an election year, no less;

NOW, THEREFORE, we, 7‑Eleven, do hereby proclaim the following “Hot Dog Bill of Rights,” to wit:

II. The right to customize your hot dog with a variety of toppings, including FREE chili and cheese.

IV. The right to believe in totally made up, but totally tasty constitutional rights.

“7‑Eleven is clearly America’s choice for hot dogs. Our customers get more bang for their buck, more topping options and tasty 100% beef — small wonder we sell a Big Bite hot dog every 2.7 seconds of the day!,” said Dennis Phelps, vice president of fresh food and proprietary beverages. “While we relish the competition, we are confident that this monarchical outlier has a long way to go to ketch-up with 7‑Eleven’s All-American hot dog.”

Good old Yankee ingenuity has made the 7‑Eleven hot dog a fan favorite. In an online consumer survey1 that compared more than 10 retailers offering hot dogs, 7‑Eleven was rated the highest as “favorite place to buy hot dogs” and they cited taste as one of the main reasons.

So, too, the results of the same survey1 found that consumers credit 7‑Eleven’s hot dogs for being tasty, flavorful and a great value. In addition, consumers love the condiment selection, including free chili and cheese, and the ability to add as much or as little as they like to customize their hot dog.

Added Phelps: “We’re 7‑Eleven … and we approve of this message.”

Join the conversation online and show us how you top your Big Bite hot dog by using #hotdogdemocracy to keep up with the deliciousness.

About 7‑Eleven, Inc.
7‑Eleven, Inc. is the premier name and largest chain in the convenience retailing industry. Based in Irving, Texas, 7‑Eleven operates, franchises and licenses more than 10,700 7‑Eleven® stores in North America. Globally, there are some 57,900 7‑Eleven stores in 17 countries. 7‑Eleven has been honored by a number of companies and organizations. Accolades include placing #7 on Entrepreneur magazine’s Franchise 500 list for 2016, #1 on Entrepreneur magazine’s 2014 Top Global Franchise list; #10 spot on Entrepreneur magazine’s Franchise 500 list for 2015; #1 on “Best Retail Franchises” list for April 2015 by FranchiseRankings.com; #3 on Forbes magazine’s Top 20 Franchises to Start; and is among GI Jobs magazine’s Top 100 Military Friendly Employers for 2016. 7‑Eleven is franchising its stores in the U.S. and expanding through organic growth, acquisitions and its Business Conversion Program. Find out more online at www.7‑Eleven.com. 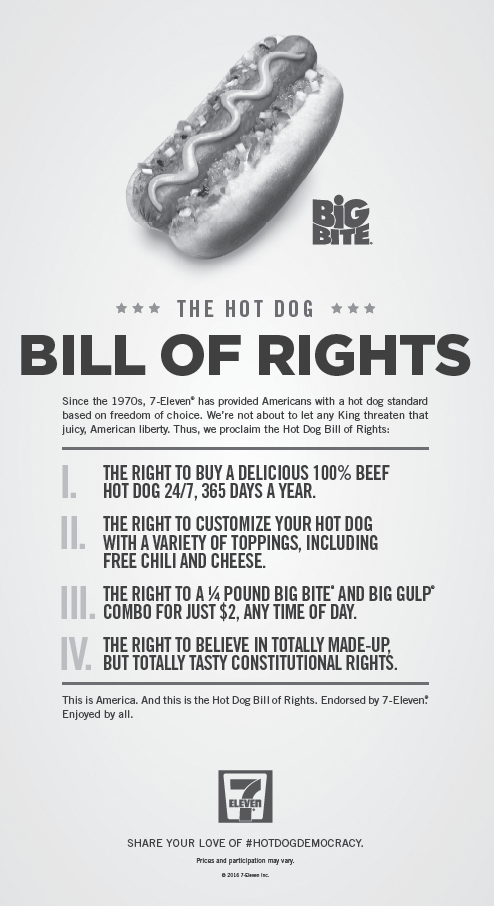 7‑Eleven calls for Americans to exercise their freedom of choice to top their hot dogs just how they want.