StubHub logo patch to appear on front left of Sixers’ game jerseys starting in the 2017-18 season.

San Jose, California, 2016-May-18 — /EPR Retail News/ — What has become commonplace on uniforms and sports leagues around the world is now coming to the United States.

The Philadelphia 76ers and StubHub have announced the first jersey patch sponsorship among major sports leagues in American history.  The StubHub patch will feature the brand’s recently launched new logo and appear on the front left of Sixers’ game jerseys starting in the 2017-18 season.  On April 15, 2016 the NBA Board of Governors approved the sale of jersey sponsorships as part of a three-year pilot program.  Starting in the 2017-18 season StubHub’s jersey patch will be included on all jerseys sold at Sixers’ home games.

“This marks another groundbreaking first for the Philadelphia 76ers and StubHub.  Our brands are now inextricably linked as we create lifelong memories for our fans in Philadelphia and around the world,” said Philadelphia 76ers CEO Scott O’Neil. “Our partnership with StubHub continues to generate progressive and forward-thinking platforms created to improve the fan experience and advance our industry.  The essence of our relationship with StubHub is our shared culture and ambition to innovate, which drives us to reimagine traditional partnership activation and continually ask, ‘what if’?”

“Since day one, StubHub has been a pioneer and innovator within the live entertainment ecosystem and we could not be more excited to join the Philadelphia 76ers in making history with this ground-breaking partnership,” said StubHub President Scott Cutler, “The Philadelphia 76ers are not only a beloved global brand, they also serve as incredible partners and collaborators for StubHub – and we look forward to continuously innovating and improving the fan experience together.”

Continuing to break new ground in the sports and live event industry, earlier this year the Sixers made StubHub their Official Ticketing Partner and launched a revolutionary new ticketing platform. The new platform will give Sixers’ fans unparalleled access to primary and secondary ticket inventory with a seamless user and purchase experience starting in the 2016-17 season. 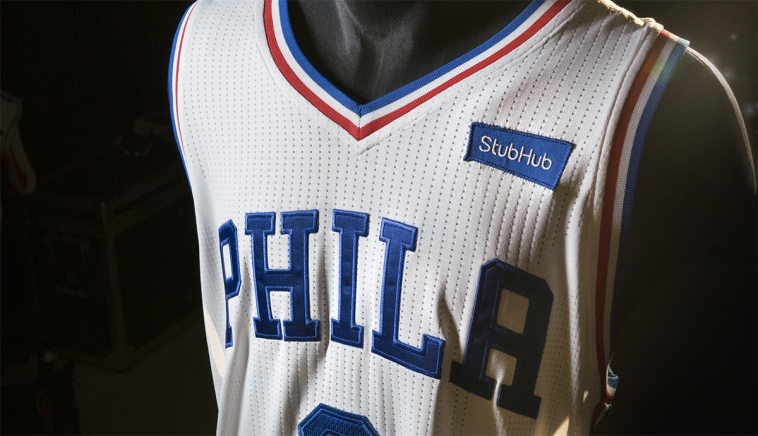