Ralphs customers and associates can support after-school programs through the supermarket chain’s nonprofit arm, The Ralphs Fund, by donating their spare change in collection canisters located at the checkstands in their neighborhood Ralphs supermarket. The After-School Education Program fundraising campaign will run from July 20 through October 11, 2016.

“Ralphs’ commitment to education goes back to the very beginning of our company,” said Donna Giordano, president of Ralphs Supermarkets. “We are continuing that commitment today. Our checkstand canister fundraising program and the generosity of our customers and associates allow us to provide support to numerous youth development organizations as well as a broad range of after-school and physical education programs.”

Together with its customers and associates, Ralphs contributed more than $150,000 in 2015 to programs focused on educating our youth, including after-school enrichment programs, in Southern California communities served by Ralphs stores.

Ralphs Grocery Company was founded in 1873 and currently operates 198 supermarkets from its headquarters in Los Angeles. Last year, Ralphs contributed more than $6 million to support education, hunger relief, women’s health and local nonprofit organizations in the communities served by the company’s stores. Ralphs is a subsidiary of The Kroger Co., (NYSE:KR), one of the nation’s largest food retailers, based in Cincinnati, Ohio. For more about Ralphs, please visit our web site at www.ralphs.com. 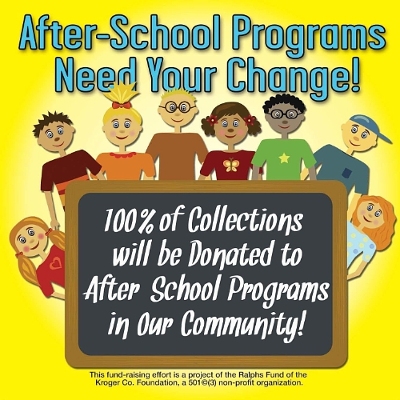