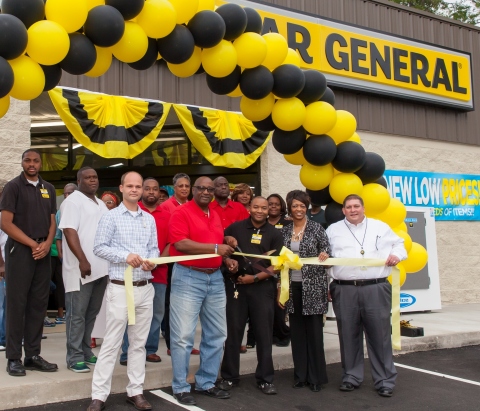 “This morning’s grand opening celebration commemorates a major milestone for Dollar General and reflects our unwavering commitment and dedication to provide convenience and everyday low prices to the communities we serve,” said Todd Vasos, Dollar General’s CEO. “On behalf of the entire Dollar General leadership team, I would like to express my sincere gratitude to Dollar General employees, our communities, local governments and business partners who continually support our mission of Serving Others as we look to deliver the Dollar General business model to communities across the country.”

Dollar General proudly employs more than 6,500 employees in Alabama through approximately 675 stores and its distribution center in Bessemer, which opened in 2012.

Dollar General gives its customers more than everyday low prices on basic merchandise. Dollar General is deeply involved in the communities it serves and is an ardent supporter of literacy and education. At the cash register of every Dollar General store, customers interested in learning how to read, speak English or get their General Education Diploma (GED) can pick up a brochure with a postage-paid reply card that can be mailed in for a referral to a local organization that offers free literacy services. Since its inception in 1993, the Dollar General Literacy Foundation has awarded more than $120 million in grants to nonprofit organizations, helping nearly more than 7.1 million individuals take their first steps toward literacy or continued education. For more information about the Dollar General Literacy Foundation and its grant programs, visit www.dgliteracy.com.

This morning’s grand opening celebration is one of the planned 900 new stores in 2016 throughout the 43 states Dollar General serves.

For additional information, photographs or items to supplement a story, please visit the DG Newsroom, contact the Media Relations Department at 1-877-944-DGPR (3477) or via email at dgpr@dg.com.

Forward-Looking Statements
Dollar General includes “forward-looking statements” within the meaning of the federal securities laws regarding planned store openings. Forward-looking statements are subject to risks, uncertainties and other factors that may change at any time and may cause actual results to differ materially from those that Dollar General expected. Many of these statements are derived from Dollar General’s operating budgets and forecasts, which are based on many detailed assumptions that Dollar General believes are reasonable, or are based on various assumptions about certain plans, activities or events which we expect will or may occur in the future. However, it is very difficult to predict the effect of known factors, and Dollar General cannot anticipate all factors that could affect actual results that may be important to an investor. All forward-looking information should be evaluated in the context of these risks, uncertainties and other factors, including those factors disclosed under “Risk Factors” in Dollar General’s Annual Report on Form 10-K filed with the Securities and Exchange Commission on March 22, 2016 and Quarterly Report on Form 10-Q filed with the Securities and Exchange Commission on May 26, 2016.

About Dollar General Corporation
Dollar General Corporation has been delivering value to shoppers for over 75 years through its mission of Serving Others. Dollar General helps shoppers Save time. Save money. Every day!® by offering products that are frequently used and replenished, such as food, snacks, health and beauty aids, cleaning supplies, basic apparel, housewares and seasonal items at low everyday prices in convenient neighborhood locations. With 13,000 stores in 43 states, Dollar General is among the largest discount retailers in the United States. In addition to high quality private brands, Dollar General sells products from America’s most-trusted manufacturers such as Clorox, Energizer, Procter & Gamble, Hanes, Coca-Cola, Mars, Unilever, Nestle, Kimberly-Clark, Kellogg’s, General Mills, and PepsiCo. For more information on Dollar General, please visit www.dollargeneral.com.