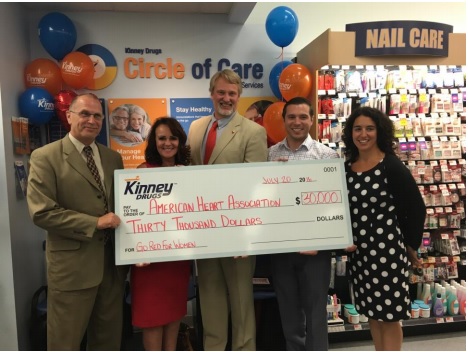 Kinney Drugs, the drug store division of KPH Healthcare Services, Inc., received this top honor after raising $30,000 during their 2016 Heart Health campaign. This donation edged out all other companies in the nation, including Wall Street financial firm Morgan Stanley, which ranked #2 with a donation of $29,969.

“It’s a great honor to announce that our local, employee-owned Kinney Drugs raised the most money in the eight-state Founders Affiliate during our 2016 Wear Red Day campaign,” said Franklin Fry, executive director, American Heart Association Greater Syracuse. “According to our data, they are also No. 1 in the entire country. We congratulate them on this great accomplishment.”

Always the first Friday in February, Wear Red Day raises awareness about and the funds to fight heart disease in women. Heart disease is the No. 1 cause of death for women. On Wear Red Day, businesses nationwide invite their staff to wear red and donate $5 each to the American Heart Association. Kinney Drugs extended this one day promotion to be a month-long campaign of awareness and fundraising, and invited their customers and vendors to donate, leading to the impressive total. Employees from all divisions of KPH Healthcare Services, including ProAct, Inc., Health Direct and Noble Health Services, also contributed to the fundraising efforts.

“This partnership was created in an effort to not only raise awareness for heart disease but to take action and to fight back,” said Jim Spencer, president of Kinney Drugs stores. “The continued support and generosity of our customers, employees and business partners is unparalleled. They are the reason Kinney Drugs has been recognized as the top fundraising company in the country!”

These funds will support what is raised throughout the year for the Syracuse Go Red For Women campaign. Bridget-ann Hart, R.Ph., president and CEO of KPH Healthcare Services, is serving for the third year on the executive leadership team for that campaign, which will culminate with the 2016 Go Red for Women Luncheon on Thursday, October 27, 2016 at the Oncenter, Syracuse.

“The American Heart Association/American Stroke Association (AHA/ASA) is also immensely proud of the contributions Kinney Drugs has made towards the health of our community,” Fry said. “Not only have they taken steps such as moving tobacco products out of sightlines of customers in many of their stores and focused on the heart health of women throughout American Heart Month in February, they have also dedicated significant financial support for the work of the AHA/ASA. We are grateful to all those at Kinney Drugs, both staff and customers alike, for their contributions, which will allow the AHA/ASA to better meet its mission – working for a world free of heart disease and stroke.”