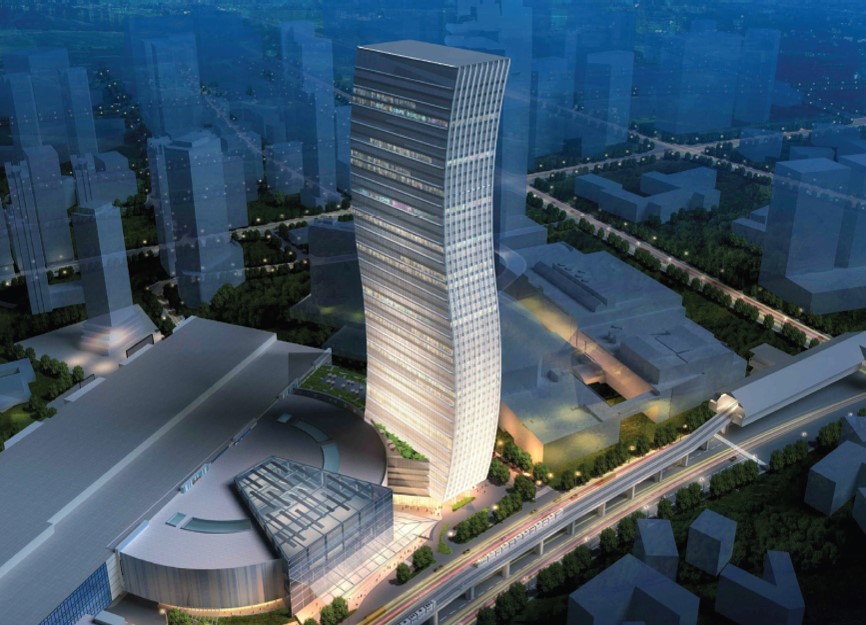 Pasay City, Philippines, 2016-Aug-17 — /EPR Retail News/ — SM Megamall is still at the heart of a mall revolution even after 25 years since opening its doors to the public. As the third mall of retail pioneer Henry Sy, Sr., SM Megamall has evolved into one of SM’s most versatile developments, poised to redefine the shopping landscape with an exciting new expansion.

Rising on the lot beside the recently launched Mega Fashion Hall is a 50-storey office tower spanning over 170,000 square meters of gross floor area which is targeted for completion in  2019.

“SM has always been about innovation.  This will be a modern and well-designed tower with huge surprises on the retail side. It will be very exciting,” SM Supermalls Senior Vice President Steven Tan said.

The design of the new tower is a curvy S-shape that represents the next step in the architectural evolution of the mall, shared Architect Fides Hsu, SM Engineering Design and Development Corp. Vice President for Design. The interior will be modern and corporate, and will take its cue from the tower’s architecture.

SM Megamall opened its doors to the public some 25 years ago on June 28, 1991 with a total floor plate of 311,898 square meters that stretched for almost a mile and consisted of six levels. It showcased SM Department Store, two SM Supermarkets, a food court, 12 cinemas, a bowling center, the first ice skating rink, the Megatrade Hall and an art walk which featured a whole floor of art galleries and exhibits.

Over the course of several years, SM Megamall underwent  a number of expansions and enhancements to cater to a highly dynamic market. SM Megamall first expanded in 2009 when it opened Mega Atrium that connected Buildings A and B on Julia Vargas, adding 16,368.64 sqm of retail space. It features the Chapel of the Eucharistic Lord at 1,700 sqm and showcases trendy and premium brands such as GAP, Promod, Springfield, and restaurants like Sambokojin, Mesa, Yabu, Chili’s, Kichitora, Choi Garden, Amici, and Filipino favorites Barrio Fiesta and Cabalen to name a few. In 2011, it added the Carpark Building C fronting the busy avenue of EDSA that housed offices, additional parking areas and a transportation terminal that caters to 1,850 buses a day or an average of 142 buses per hour.

Mega Fashion Hall was unveiled in 2014 which redefined the mall’s market reach and housed the flagship store of H&M as well as one of the biggest Zara and Uniqlo stores in the country. It was also the launch pad of furniture powerhouse Crate and Barrel. Michelin-star restaurants like Tim Ho Wan and Din Tai Fung also found their way to the new hall. Designed like a semi-circular drum with a wedge-shaped atrium facing EDSA, the new hall’s exterior design was inspired by bar codes. “With Mega Fashion Hall, it attracted an even wider market, ultimately changing the customer mix of Megamall,” Tan said. With the opening of Mega Fashion Hall, the mall expanded to a total of 474,225 sqm making it one of the largest in the country.

Beyond innovation
More than its retail offerings, every innovation done at every SM mall has created more value for SM’s properties as well as its host communities. SM Prime Chairman Henry Sy, Jr. recalled that this was due to his father’s acumen in spotting opportunities. In the case of SM Megamall, the opportunity came in the aftermath of a coup d’etat, an energy crisis, an earthquake and the eruption of Mt. Pinatubo between the 1980s to the 1990s.

At that time, Sy said his father, Henry Sy, Sr. was keenly interested in a five hectare property located on the corner of Ortigas Avenue and EDSA that belonged to the Ortigas family. The elder Sy just opened his first mall on North EDSA in 1985 and was on the scout for the next opportunity. Fellow businessman John Gokongwei was also interested in the property.

The area then was being valued at PHP1,800 to PHP2,000 per square meter. “Residential lots in the posh village Corinthian Gardens were selling for PHP4,000 per sqm. So we thought, how can we go wrong,” Sy said.

To break an impasse during the bidding, a toss coin was suggested which was won by the Gokongwei group. The losing bidder would instead get an option to buy a slightly smaller property located along EDSA between Ortigas Avenue and Shaw Boulevard that would be the site of SM Megamall.

Not to be fazed by this momentary setback, SM quickly expanded and was able to secure additional hectares beside its initial property bringing the total to about 11.5 hectares.

SM’s constant desire to innovate and enhance its developments has helped property values to appreciate over time especially in the surrounding communities which has resulted in a booming business environment in that particular side of the EDSA corridor.

“When we started Megamall, a lot of people questioned its viability. A lot of them asked, who will go there.  And I said, the whole EDSA will be our customer. Whoever passes through EDSA, from Caloocan to Pasay, would be our market,” the younger Sy added.

Glenn Ang, SM Supermalls Senior Vice President who worked as SM’s regional manager also recalled that the new mall drew people mainly from the east corridor like Cainta and Antipolo and other municipalities in Rizal. When the MRT was built in 2000, SM Megamall became more accessible to crowds from Caloocan to Pasay. It also attracted people from the northern provinces of Bulacan and Pampanga who reached the mall by bus.

“With the combination of SM North EDSA and SM Megamall, this really triggered the mall revolution,” Sy said.

Beyond its exciting retail offerings, SM Megamall has also made huge inroads in incorporating sustainable features into the mall. Hsu said the mall maximizes natural light by having high ceilings, sky lights and bigger glass windows using double glazed Low-E panels to conserve energy. It also uses a ceiling finish that is made from recycled paper waste. It has also migrated to the use of LED lights that can reduce energy consumption by 50% to 60% and last around 60,000 burning hours.

To conserve water, it implements a water recycling program and uses fixtures that support the efficient use of water. It also promotes viable solid waste management by segregating its daily trash, recycling and bringing the remainder to accredited government disposal facilities.

Through the integrated bus terminal, the mall is able to help reduce greenhouse gas emissions by requiring transport operators to submit certification for emission tests. More so, the terminal helps decongest traffic along EDSA by providing adequate and appropriate loading and waiting stations for commuters. SM Megamall has also implemented a Business Continuity Management System which has been recently certified by the International Organization for Standardization (ISO), affirming SM’s commitment to continue to be in business especially during or right after a calamity.

SM Megamall was recently given the CERTIFICATION ISO 22301-2012 (Business Continuity Management System) as validation of its commitment to the public to run organization resiliency, recovery and contingency programs to ensure business continuity in the event of any disruptions. SM Megamall enjoys the honor as the only mall in the country to have been awarded such certification, given by a recognized testing company TUV SUD Singapore.

Also, like in all SM malls, SM Megamall also caters to the special needs of persons with disabilities through PWD-friendly ramps, elevators and service areas.

Listening ever so closely to its markets, SM Megamall is getting ready for its next phase of development keeping in mind the Sy family’s goal of always building things “bigger and better” for the benefit of its millions of customers and host communities.

“Every single day that you walk in any SM mall, you have to walk with a purpose. That is what the Sy family has taught us. That means always looking for constant improvement, constant innovation and an interpretation of what the market is wishing and hoping for and want to see,” SM Supermalls President Annie Garcia said.