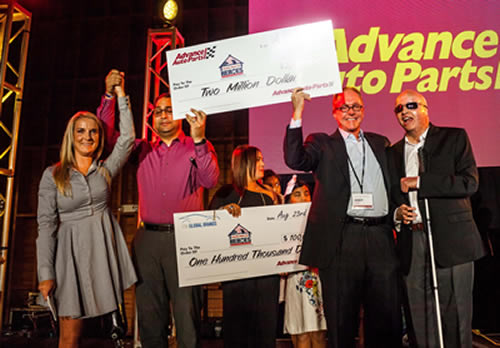 This significant donation was made possible due to the generosity of Advance Auto Parts and its vendor partners. Advance held its 2016 Vendor Golf Classic on August 22 – 24 at the historic Pinehurst Resort in North Carolina. The event, now in its eighth year, has raised millions of dollars for charities. All funds raised at this year’s event, which totaled $2.1 million, benefitted Building Homes for Heroes. Vendor partners, BBB Industries, manufacturer of CARQUEST starters and alternators, and Johnson Controls (JCI), manufacturer of Autocraft Batteries, were major sponsors of Advance’s 2016 Vendor Golf Classic.

“Advance Auto Parts is one of our nation’s most generous sponsors for many of our severely injured veterans,” said Andy Pujol, Founder and CEO of Building Homes for Heroes. “I want to thank their team, as well as their vendor partners for this year’s gift, which will help us achieve our goal to gift as many as one mortgage-free home every 10 days in 2016 and 2017. Together, we are building homes and rebuilding lives.”

“Advance has been a proud supporter of Building Homes for Heroes since 2011,” said Tom Greco, President and Chief Executive Officer of Advance Auto Parts. “Since that time, we are honored to have raised $6.5 million for this noble, patriotic organization that is helping to change the lives of our injured veterans and their families. This year marked another amazing event thanks to our vendors’ generosity.”

At this year’s event, Advance was pleased to welcome United States Marine Corps Sergeant Kirstie Ennis, who spoke at the event on behalf of Building Homes for Heroes. Army Specialist Hugo Gonzalez and Army Sergeant Joel Tavera, both of whom received homes from the organization, also attended the event.

Sgt. Ennis, who was severely injured in Afghanistan and had her left leg amputated in December 2015 due to her injuries, will be gifted a home. At the Advance event, Pujol surprised Ennis by announcing that the land for her home had been purchased. The home will be located in Glennwood Springs, Colorado where Ennis can continue her snowboarding career and training for the 2018 Winter Paralympics in Pyeonchang, South Korea. Ennis, who had never snowboarded before serving in the Marines, has been ranked as high as fifth in the world in women’s snowboard cross by the International Paralympic Committee.

“The donation from Advance Auto Parts is amazing and will help change the lives of so many injured veterans and their families,” said Ennis. “These homes will rekindle relationships, strengthen families, promote healing, and allow independence. We as warriors want nothing more than to push past adversity and continue living a healthy and productive life. Thank you for helping to provide us with that opportunity. Thank you for helping us regain our independence.”

About Building Homes for Heroes®
Founded in 2006, Building Homes for Heroes® is strongly committed to rebuilding lives and supporting the brave men and women who were injured while serving the country during the time of the wars in Iraq and Afghanistan. The organization builds or modifies homes, and gifts them, mortgage-free, to veterans and their families. These homes not only help to remove the family’s financial burden, they help to restore the individual’s freedom, and enable the veteran to lead a more independent and productive civilian life.

Building Homes for Heroes®, among the fastest growing and most efficiently-run charities in the nation, is on track to gift one mortgage-free home every 10 days this year and in 2017 to injured veterans, and proudly reached a record-setting fifth consecutive year in 2015 of achieving at least a 93% program rating, and has received a 4-star rating from Charity Navigator, including a 100% score in transparency and accountability. Founder and CEO Andy Pujol has never accepted a salary since the organization’s inception and has volunteered all of his time to supporting our nation’s veterans. To learn more, visit www.buildinghomesforheroes.org.

About United States Marine Sergeant Kirstie Ennis
United States Marine Sergeant Kirstie Ennis, who was 17 when she enlisted out of Florida in 2008, nearly died when the CH-53D helicopter she was flying in as an aerial gunner crash landed in the Helman Providence of Afghanistan in June 2012. The accident broke her left ankle and caused severe damage to her leg, tore her rotator cuff and labrum, injured the cervical discs of her spine, shattered her jaw, and caused severe facial lacerations, traumatic brain injury and posttraumatic stress disorder. Ennis has had nearly 40 surgeries since her injury and her leg was amputated above the knee in December 2015. But Ennis’ story has not been defined by her injuries, but her heroic spirit and determination to overcome them. Ennis is training to compete in women’s snowboard cross in the 2018 Winter Paralympics in Pyeongchang, South Korea. Ennis recently completed a 72-day, 1,000-mile walk across mainland Britain where she and five other injured veterans honored their fallen comrades. Her story has been covered internationally by People Magazine, Cosmopolitan, ABC News and the Telegraph and Daily Mail. For more information about Ennis, like her at https://www.facebook.com/kirstieennis2 or follow her on Twitter@KirstieEnnis.