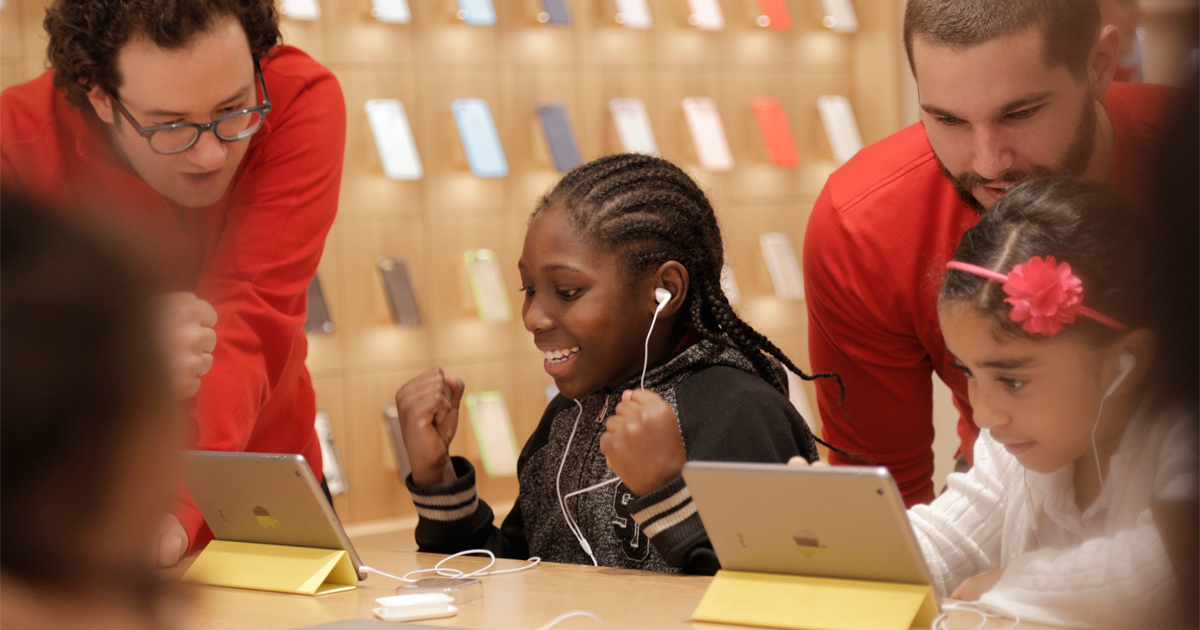 Cupertino, California, 2016-Nov-20 — /EPR Retail News/ — Apple today (NOVEMBER 17, 2016) opened registration for Hour of Code workshops at all 487 Apple retail stores worldwide, from December 5 through 11 in celebration of Computer Science Education Week. Among the most popular events at the Apple Store, Hour of Code workshops teach the basics of computer science with Code.org’s programming tutorials. Apple and Code.org share the goal of giving every student the opportunity to learn computer science.

“Hour of Code embodies our vision for Apple stores as a place for the community to gather, learn and be entertained,” said Angela Ahrendts, Apple’s senior vice president of Retail. “We’re proud to introduce the Swift Playgrounds app into the workshops and honored to again work side-by-side with Code.org on this incredibly important initiative. Hour of Code is one of the absolute highlights of the year for both our teams and the families that visit our stores.”

“Since we started Hour of Code in 2013, Apple has each year upped its participation and found ways to introduce more kids to computer science,” said Hadi Partovi, founder and CEO of Code.org. “The global footprint Apple offers through its stores and talented staff has reached tens of thousands of kids, and with the introduction of Hour of Code in Swift Playgrounds we can introduce coding to even more.”

This year, Hour of Code programs at many Apple locations will include an introduction to Swift Playgrounds, the free new app for iPad that brings coding to life. The interactive interface of Swift Playgrounds encourages beginners to explore working with Swift, the easy-to-learn programming language from Apple, used by professional developers to create world-class apps.

“Coding is just like any language, the earlier you’re exposed the more successful you’ll be,” said Craig Federighi, Apple’s senior vice president of Software Engineering. “Whether at an Apple Store, in a classroom or at home with an iPad, Swift Playgrounds brings real coding concepts to life and empowers the next generation with the skills they need to express their creativity.”

A new Hour of Code challenge in Swift Playgrounds makes it easy for anyone to set up their own one-hour coding event, and for those continuing to build their coding skills on iPad, Swift Playgrounds adds a new Learn to Code 3 set of lessons and a companion Teacher Guide.

Hour of Code for Educators
In addition to in-store workshops, Apple has developed a series of tools to extend Hour of Code into schools and community centers, including a free facilitator guide offering lesson ideas, group activities and more. Apple Teacher, a free, professional self-paced learning program supporting and celebrating teachers in the US, has added resources, badging and recognition for learning and teaching coding with Swift Playgrounds on iPad. Continuing Apple’s $100 million commitment and ongoing partnership to provide 114 underserved schools with technology, services and support, Apple will provide materials and resources to assist ConnectED schools around the country to host their own Hour of Code workshops.

Apple revolutionized personal technology with the introduction of the Macintosh in 1984. Today, Apple leads the world in innovation with iPhone, iPad, Mac, Apple Watch and Apple TV. Apple’s four software platforms — iOS, macOS, watchOS and tvOS — provide seamless experiences across all Apple devices and empower people with breakthrough services including the App Store, Apple Music, Apple Pay and iCloud. Apple’s more than 100,000 employees are dedicated to making the best products on earth, and to leaving the world better than we found it.