During the 2016 season, Bryant continued to rise as one of the most sought after players in the game, delivering a game-winning, team-rallying home run in World Series Game Five. Bryant and team then went on to lead the Chicago Cubs to win their first World Series title since 1908. “I’m really grateful for my opportunities and what I have here,” said Bryant. “When you’re in the moment, you just want to put out the best version of yourself you can be.” (1)

EXPRESS first announced Kris Bryant as Men’s Brand Ambassador in March 2016 and since then, the baseball star has appeared in several marketing and advertising campaigns across print, digital, social media and in-store platforms. Bryant currently appears in the EXPRESS Fall Campaign, sporting the retailer’s latest dressy and casual wear photographed in the iconic city of Chicago.

“This year has brought a lot of firsts for me, from winning a World Series title to being named MVP of the National League to inspiring fans to look and feel great through my work with EXPRESS,” said Bryant. “It’s been an incredible journey so far and I’m excited to see what’s next.”

“EXPRESS’ ongoing mission is to partner with brand ambassadors who are inspiring, confident and embody the spirit of our customers,” said David Kornberg, EXPRESS President and CEO.” Kris Bryant does just that – he lives his best life and looks great doing it. Kris is an incredible athlete whose hard-work and dedication has paid off. We’re thrilled for his achievements both on and off the field.”

About Kris Bryant:
Cubs third baseman Kris Bryant finished the 2016 regular season with a .292 average, 39 home runs, 102 RBIs, 121 runs scored, and eight stolen bases. The power-hitting right-hander has one of the best-selling jerseys in baseball during 2016, according to the MLB.com Shop. He recently received the 2016 National League Hank Aaron Award.

About EXPRESS, Inc:
EXPRESS is a specialty apparel and accessories retailer of women’s and men’s merchandise, targeting the 20 to 30-year-old customer. EXPRESS has more than 35 years of experience offering a distinct combination of fashion and quality for multiple lifestyle occasions at an attractive value addressing fashion needs across work, casual, jeanswear, and going-out occasions. The company currently operates more than 650 retail and factory outlet stores, located primarily in high-traffic shopping malls, lifestyle centers, and street locations across the United States, Canada, and Puerto Rico. EXPRESS merchandise is also available at franchise locations in Latin America and the Middle East. EXPRESS also markets and sells its products through its e-commerce website, www.express.com, as well as on its mobile app. 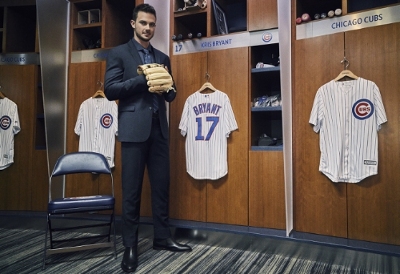