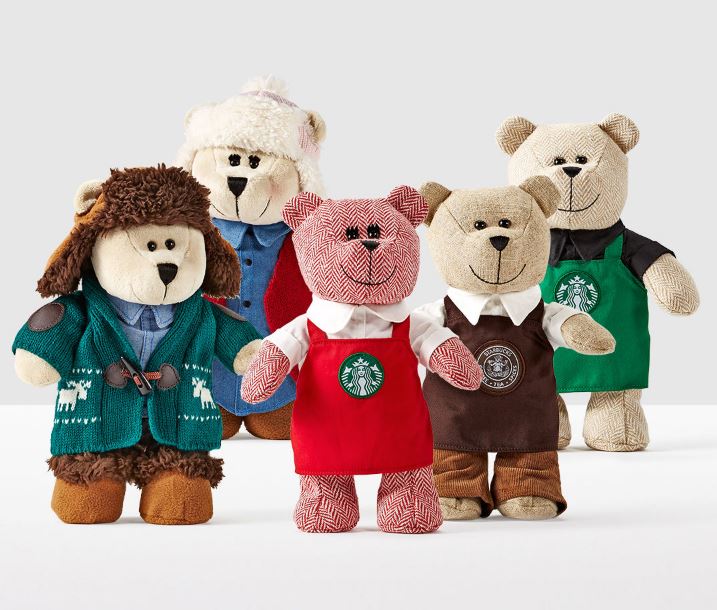 Seattle, 2016-Nov-29 — /EPR Retail News/ — Back in 1997, Starbucks quietly stocked a new gift item on its shelves. It was a small, plush bear the color of honey, dressed as a barista with a tiny green apron. This very first Bearista Bear created a sensation among Starbucks fans, with more than 100 different editions of the bears following in the nearly 20 years since.

The bears have been dressed in everything from ski jackets to surf shorts and comfy pajamas. They’ve celebrated holidays, like Lunar New Year and Halloween, and destinations around the world from Paris to Hong Kong. Some bears even masqueraded as other cuddly animals, including bumblebees, bunnies, chickens and ladybugs.

Starbucks Bearista Bears have been in hibernation in the U.S. since 2009 (although there was an alice + olivia designer bear in 2013). Now the holiday classic bear is back by popular demand for a limited time in participating U.S. Starbucks stores.

The 2016 limited-edition Bearista® Collection includes five new lovable bears. Three are baristas – one with a classic green Starbucks apron, one with a red holiday apron, and a retro 1970s bear dressed in Starbucks original brown apron and logo with corduroy flare pants. There are also two Bearista Bears with fuzzy hats – one with a red comfy sweater and the other with a cozy green sweater. Each has a “Starbucks 2016” commemorative mark on its paw.