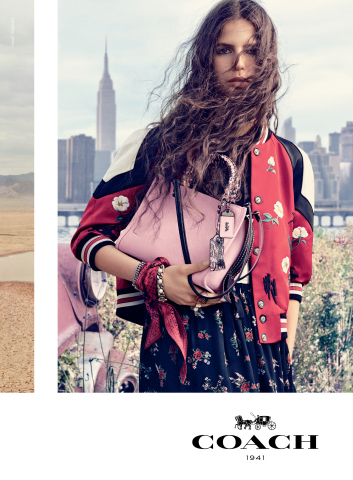 Coach, Inc. 3Q- FY2017: Our solid performance was very much in line with our expectations and our strategic initiatives

Victor Luis, Chief Executive Officer of Coach, Inc., said, “Our solid performance this quarter was very much in line with our expectations and our strategic initiatives. In a volatile and complex global environment, we delivered continued positive comparable store sales for the Coach brand in North America and gross margin expansion in each segment, while tightly controlling costs. We continued to drive growth in our directly-operated Europe and Mainland China businesses, which represent the most significant geographic opportunities for our brands. And, despite our deliberate pullback in the North America wholesale channel and the impact of calendar shifts, we delivered earnings growth. Importantly, we announced a new leadership structure and strengthened our Coach brand team, a critical step in Coach, Inc.’s evolution as a customer-focused, multi-brand organization.”

Third fiscal quarter sales results in each of Coach’s primary segments were as follows:

Mr. Luis continued, “At Stuart Weitzman, we’re executing on our plan, driving global awareness and brand relevance, and gaining traction with the millennial consumer. The response to spring newness has been particularly strong, and we continue to expect sales to increase at a double-digit pace for both the fourth quarter and the year. We’re also making key brand investments in management and creative talent, as well as infrastructure to support long-term, multi-category growth. To this end, we’re especially excited about the arrival of Giovanni Morelli, who joins the brand this week as Creative Director.”

During the third quarter of FY17, the Company recorded the following under its previously announced plans:

These actions taken together increased the Company’s consolidated reported SG&A expenses by about $11 million, negatively impacting reported net income by $8 million after tax or about $0.03 per diluted share in the third quarter.

“While the retail environment remains uncertain, our strategic vision for our brands and our company remains clear. The traction we’ve achieved to date on our transformation plan and the success of our integration of Stuart Weitzman give us continued confidence in our direction. Moreover, with our new leadership structure, Coach, Inc. is well positioned to continue its journey as a global house of brands and to focus on opportunities to drive long-term and sustainable growth,” Mr. Luis concluded.

The Company is maintaining its operational outlook for fiscal 2017 as outlined in January.

The Company continues to expect revenues for fiscal 2017 to increase low-single digits, including the impact of currency.

In addition, the Company is maintaining its operating margin forecast for Coach, Inc. of between 18.5-19.0% for fiscal 2017. This guidance incorporates the negative impact of both Stuart Weitzman and the strategic decision to elevate the Coach brand’s positioning in the North American wholesale channel, including a reduction in promotional events and the closure of about 25% of doors.

Interest expense is now expected to be in the area of $20 million for the year while the full year fiscal 2017 tax rate is still projected at about 26%.

Taken together, the Company continues to project double-digit growth in both net income and earnings per diluted share for the year.

The Company is not able to provide a full reconciliation of the non-GAAP financial measures to GAAP because certain material items that impact these measures, such as the timing and exact amount of charges related to our Operational Efficiency Plan and acquisition related charges, have not yet occurred or are out of the Company’s control. Accordingly, a reconciliation of our non-GAAP financial measure guidance to the corresponding GAAP measures is not available without unreasonable effort. The Company has identified the estimated impact of the items excluded from its fiscal 2017 guidance.

This fiscal 2017 non-GAAP guidance excludes (1) expected pre-tax charges of around $20 million to $35 million attributable to the Company’s Operational Efficiency Plan (which will primarily include the costs of replacing and updating the Company’s core technology platforms, organizational efficiency costs, as well as network optimization costs) and (2) expected pre-tax Stuart Weitzman acquisition-related charges of around $20 million (which primarily include the impact of contingent purchase price payments, subject to achieving a certain revenue target, and office lease termination charges).

Coach, Inc. is a leading New York design house of modern luxury accessories and lifestyle brands. The Coach brand was established in New York City in 1941, and has a rich heritage of pairing exceptional leathers and materials with innovative design. Coach is sold worldwide through Coach stores, select department stores and specialty stores, and through Coach’s website at www.coach.com. In 2015, Coach acquired Stuart Weitzman, a global leader in designer footwear, sold in more than 70 countries and through its website at www.stuartweitzman.com. Coach, Inc.’s common stock is traded on the New York Stock Exchange under the symbol COH and Coach’s Hong Kong Depositary Receipts are traded on The Stock Exchange of Hong Kong Limited under the symbol 6388.

This information to be made available in this press release may contain forward-looking statements based on management’s current expectations. Forward-looking statements include, but are not limited to, the statements under “Fiscal Year 2017 Outlook,” as well as statements that can be identified by the use of forward-looking terminology such as “may,” “will,” “can,” “should,” “expect,” “intend,” “estimate,” “continue,” “project,” “guidance,” “forecast,” “anticipated,” “moving,” “leveraging,” “targeting,” “maintaining,” “assume,” “plan,” “pursue,” “look forward to,” “on track to return,” “to achieve” or comparable terms. Future results may differ materially from management’s current expectations, based upon a number of important factors, including risks and uncertainties such as expected economic trends, the ability to anticipate consumer preferences, the ability to control costs and successfully execute our transformation and operational efficiency initiatives and growth strategies and our ability to achieve intended benefits, cost savings and synergies from acquisitions, etc. Please refer to Coach Inc.’s latest Annual Report on Form 10-K and its other filings with the Securities and Exchange Commission for a complete list of risks and important factors.