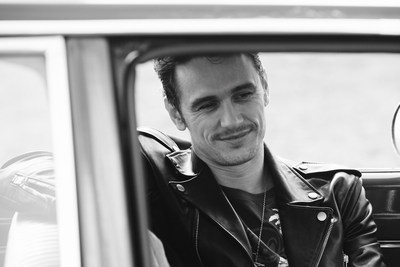 James Franco becomes the face of Coach For Men, the new fragrance launching in September

An actor, director, writer, artist and philanthropist, James Franco embodies the creativity, confidence, curiosity and innate style of the Coach Guy. He is dynamic, daring, magnetic and multifaceted. He is defined by harmonious dualities: rugged yet refined, fearless and brave yet thoughtful and grounded. He has a rebellious spirit—and it’s perfectly fitting that he once played James Dean.

“James is the quintessential-cool Coach guy. He’s handsome, there’s a bit of danger and he’s thoughtful and challenging, energetic and prolific,” Stuart Vevers said. “He represents so many of the references I’ve used at Coach—references of American style that resonate around the world.”

“Creativity is the way I engage with life. It’s the way I engage with other people and communicate, and it’s really the way I find meaning in life,” said James Franco. “I enjoyed collaborating with Stuart. There are a lot of references to Coach tradition in his designs, but with an added spin, and that idea is something I have done in my creative work.”

Coach, Inc. is a leading New York design house of modern luxury accessories and lifestyle brands.  The Coach brand was established in New York City in 1941, and has a rich heritage of pairing exceptional leathers and materials with innovative design. Coach is sold worldwide through Coach stores, select department stores and specialty stores, and through Coach’s website at www.coach.com.  In 2015, Coach acquired Stuart Weitzman, a global leader in designer footwear, sold in more than 70 countries and through its website at www.stuartweitzman.com. Coach, Inc.’s common stock is traded on the New York Stock Exchange under the symbol COH and Coach’s Hong Kong Depositary Receipts are traded on The Stock Exchange of Hong Kong Limited under the symbol 6388.