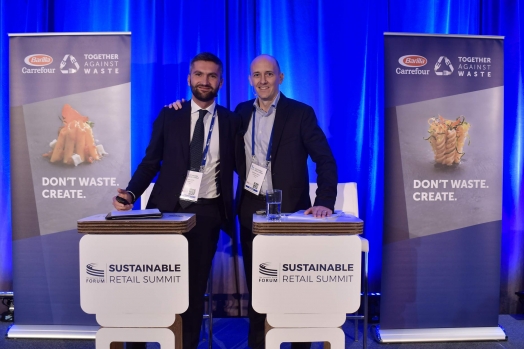 Boulogne-Billancourt‎, France, 2017-Oct-17 — /EPR Retail News/ — Carrefour is actively involved in reducing and reusing food waste. Various actions involving customers, suppliers, stores and employees were carried out to achieve this objective. The Group wants to go even further and has announced a target of reducing its food waste by 50% by 2025 compared to 2016 levels. This commitment will be achieved through its own actions but also by strengthening the relationship that Carrefour maintains with its suppliers and customers. One of the latest examples comes from Italy, where Carrefour has established a partnership with Barilla.

This partnership was forged from an observation: as consumers, we have often have vegetables which could go to waste in our refrigerators as well as pasta which is an easy-to-cook food and which can be eaten accompanied by various vegetables. Barilla and Carrefour are working together to educate their customers and show them that it is easy to combine these two categories of foods rather than throwing them away.

Both companies have promoted this initiative through an in-store display and animation campaign featuring simple, anti-waste pasta recipes using vegetables which were developed by chefs working with Barilla. The message Barilla and Carrefour want to convey is that even the vegetables left over at the end of the week can be easily used.

The operation was well received in the pilot store in Milan and will be extended to more than forty stores by the end of the year in Italy.