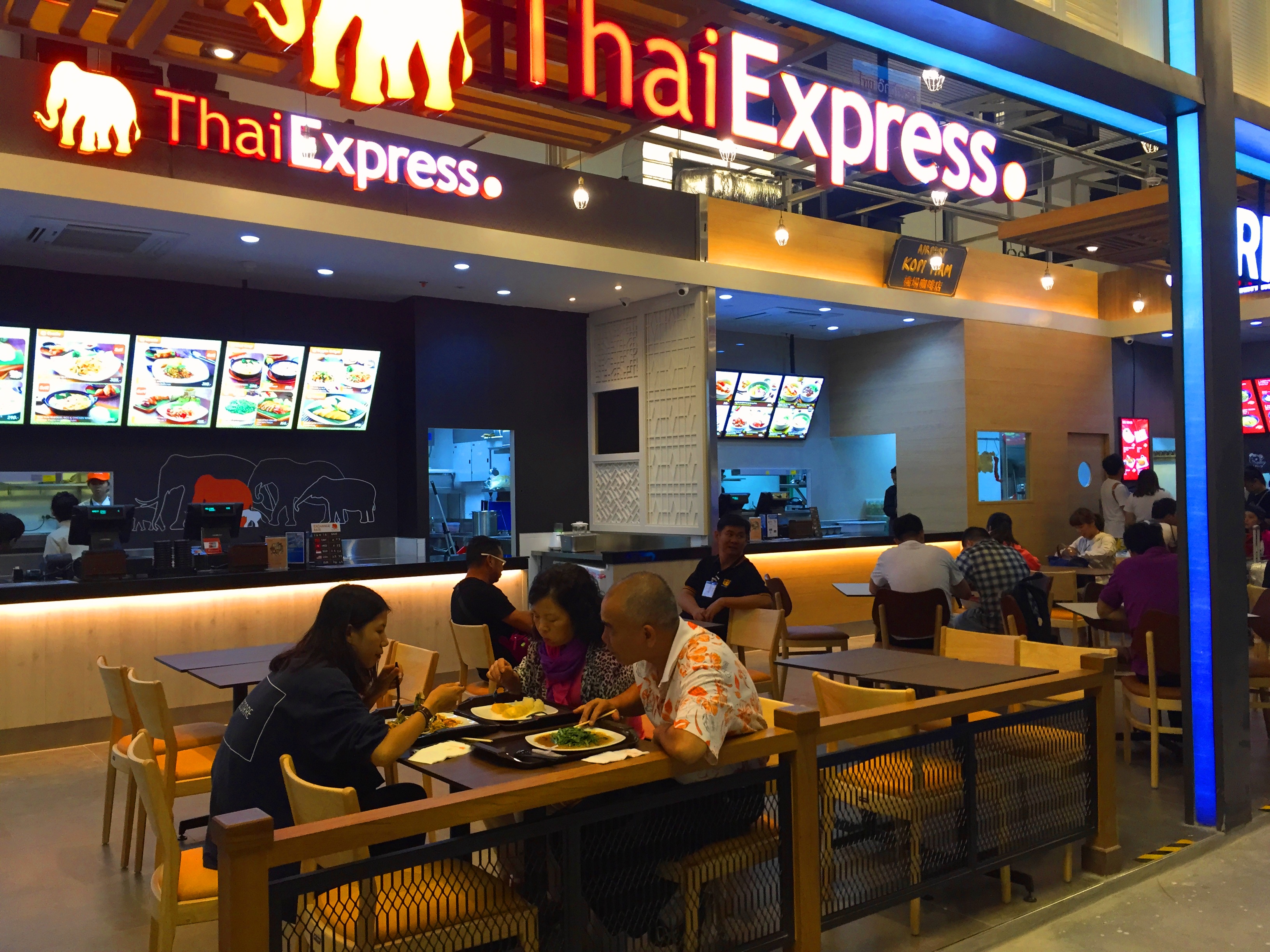 LONDON, 2016-Oct-27 — /EPR Retail News/ — SSP Group plc, a leading operator of food and beverage outlets in travel locations worldwide, has consolidated its position in the Thai market with a number of new contract wins.

At Phuket International Airport, SSP has been awarded a four-year contract to operate eight concepts in the new international Terminal 2. Valued at approximately 1.5 billion THB (£33 million*) the new deal will make SSP the leading concessionaire at the airport.

Landside, SSP will run all food and beverage operations on the mezzanine floor. Its offer will include Burger King, Bill Bentleyn Pub, Ajisen Ramen, Thai Express, Airport Kopitiam, Dairy Queen and The Coffee Club. Airside, passengers will be able to choose from Burger King and Bill Bentley Pub.

Commenting on the win, Chris Rayner, CEO SSP Asia Pacific said; “We have been running food and beverage concessions in Thai airports, where we are the clear market leader, since 1995 in cooperation with our Thai partner Minor Food Group. SSP Thailand’s strong track record in delivering great brands, great customer service and great sales all contributed to us being awarded the contracts in Phuket, and we are delighted to be building on our success in this strategically important region.”

Separately, at Suvarnabhumi Airport, SSP has extended all its existing contracts by four years. It has also extended its contracts at Chiang Mai International Airport by two years until July 2018.

Thai Express is the world’s largest chain of modern Thai restaurants. Serving traditional Thai cuisine in a relaxed and yet contemporary environment, today the brand can be found at over 30 locations from China and Malaysia to Vietnam and Singapore.

Japanese brand Ajisen Ramen is the country’s leading ramen restaurant and can now be found across the Asian continent. It serves a range of Asian dishes in a format that is simple, tasty and healthy as well as convenient.

Founded in 1954, the Burger King® brand is the second largest fast food hamburger chain in the world. The original home of the Whopper®, the Burger King ® system operates more than 14,000 locations in approximately 100 countries and U.S. territories.

Bill Bentley Pub is a classic English pub, styled to create the warm welcome of the traditional local.

Airport Kopitiam, is a bespoke SSP concept which draws inspiration from the ever popular café culture of Malaysia. Its menu features simple meals, including kaya toast and white coffees.

Founded in the 1940s in Illinois, USA Dairy Queen is famous for its dessert treats and much more. Today it is hugely popular across Asia.

The Coffee Club, which originated in Australia, is a growing coffee chain in Asia Pacific with over 400 stores across nine countries including Thailand.

Commenting on the win, Chris Rayner, CEO of SSP Asia Pacific said; “Our proven ability to provide world-class brands together with our continuing focus on driving customer satisfaction, quality and sales have been instrumental in helping us win this latest deal. Don Mueang is not only one of the fastest growing airports in the world, but it is also where SSP’s operations in Thailand first began. We are delighted to be building on our strong partnership with Airports of Thailand PLC, and to have secured this very substantial new deal in the face of strong competition from local as well as international operators.”

The brand mix SSP will offer features a number of names that the company has already operated with great success in Thailand, including internationally renowned brands Burger King, The Pizza Company, ice cream concept Dairy Queen, coffee shop Caffè Ritazza and SSP’s own pub offer Bill Bentley. As around three quarters of the passengers who use the airport are locals, SSP is opening a range of Bangkok favourites alongside these global names. These include bakery S&P, fast food concept Thai Express, and noodle brand Yentafo. The majority of the airport’s international passengers are from South East Asia and China, and to meet their needs SSP will introduce Asia’s much loved Ajisen Ramen, and bakery Bread Talk.

SSP has worked with Airports of Thailand PLC since 1995, and today the company has a presence at all of the country’s major airports including Suvarnabhumi, Chiang Mai, Chiang Rai, Phuket, Hat Yai, Samui and Udon Thani.

· Thai Express is the world’s largest chain of modern Thai restaurants. Serving traditional Thai cuisine in a relaxed and yet contemporary environment, today the brand can be found at over 30 locations from China and Malaysia to Vietnam and Singapore.

· Bread Talk specialises in sweet and savoury bakery specifically tailored to appeal to Asian tastes. The brand was founded in 2000, and today Bread Talk serves more than 1,000 products at over 850 outlets in 17 countries.

· Family-run business S&P welcomed its first customers in 1973 and since that time it has grown to become one of Thailand’s most renowned restaurant and bakery chains. Its menu incorporates elements from Thai, Asian and Western cuisines.

· Yentafo by A. Mallika specialises in the highly popular noodle dish Yentafo – a red fish soup. Founded in 1999 by A Mallika, the brand now has 24 outlets throughout Bangkok.

· Japanese brand Ajisen Ramen is the country’s leading ramen restaurant and can now be found across the Asian continent. It serves a range of Asian dishes in a format that is simple, tasty and healthy as well as convenient.

The outlets include locally popular pan-Asian eatery Chop Chop Chang’s, leading American burger brand Carl’s Jr., and SSP’s bespoke concept The Marketplace, which has been designed to reflect the vibrancy of Brisbane’s unique food and art scenes. The Marketplace is scheduled to open in October 2015, and Chop Chop Chang’s and Carl’s Jr. will begin trading in mid-2016.

These new outlets will take the total number of units operated by SSP in Brisbane Airport to six, making it the company’s most important Australian location after Sydney. It consolidates SSP’s position and builds on the company’s recent successes across the region. It also demonstrates that the company is competitive in the domestic terminal sector, which is an important part of the Australian airport sector.

Commenting on the deal, Chris Rayner, CEO of SSP Asia Pacific said, “We have been working with Brisbane Airport for some time to understand how to deliver their vision. Our extensive research into the local market has enabled us to create an offer that encapsulates the true character of Brisbane and will help the airport to achieve its aspirations. By mixing the familiar in Chop Chop Chang’s, Roll’d, Pie Face and Fonzie Abbott, with the new in Carl’s Jr, and the tailored in The Marketplace, we have a selection of concepts that will add real excitement to the terminal.”

Andrew Brodie, general manager, aviation and retail management at Brisbane Airport Corporation (BAC), welcomed SSP to the BAC family, adding, “SSP has worked extremely hard to bring point of difference food and beverage retailers to Brisbane Airport’s Domestic Terminal and will ensure quality products that offer a unique and a memorable experience. We have no doubt travellers will embrace the new outlets.”

“We are so pleased to partner with SSP to bring our premium, quality-driven, California-style burgers to Brisbane,” said Ned Lyerly, president of international at CKE restaurants, which owns the Carl’s Jr. brand. “This new airport location serves as a unique gateway to Australians as well as a wide variety of international travellers.”

The full brand line-up is as follows:

·      This marks the Australian debut for Carl’s Jr., an American brand that stands apart from other burger restaurants by offering freshly prepared, high-quality menu items, including its famous 100 per-cent Black Angus Beef Thickburgers® served on Fresh Baked Buns, Hand-Breaded Chicken Tenders™, Hand-Scooped Ice Cream Shakes™ and Made-From-Scratch Biscuits. Carl’s Jr. and its iconic smiling Happy Star® logo have been U.S.  favourites for more than 70 years. Carl’s Jr. and its sister-chain, Hardee’s® has grown to more than 3,500 units in more than 35 countries worldwide.

·      The Marketplace, with its open space and buzzing selection of stalls, brings a fresh and fun atmosphere reminiscent of the markets to which Brisbanians flock each weekend. Customers will enjoy a modern menu packed with local flavours.

·      Fonzie Abbott, with walls adorned with coffee-making paraphernalia and teams of highly skilled baristas, is a haven for lovers of great coffee. The first outlet on Racecourse Road Brisbane opened to a flurry of excitement and the brand’s great coffee means it’s just as popular in the city today.

·      At Roll’d, customers can enjoy hawker-stall favourites from the streets of Vietnam, and other Vietnamese classics that have been enjoyed at tables across the country for generations. Among the dishes on offer are rice paper rolls, pho noodle soup, pickled salads and Roll’d’s famous banh mi rolls.

·      The humble meat pie has been an Aussie favourite for many years, and Pie Face has been a much-loved pie brand since it launched in 2003. Using only premium ingredients combined with French-style light and flaky puff pastry, Pie Face can now be found in five countries.