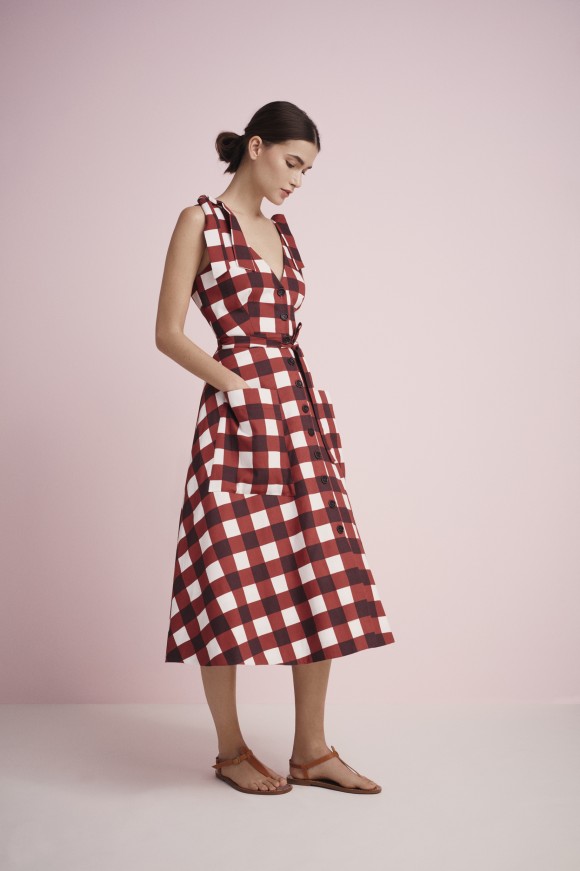 Vibrant tones of Havana inspire a palette of red, rum, banana, black and white for the J by Jasper Conran SS17 range where crisp cottons and chambray are cut elegantly into simple summer silhouettes. Scale and proportion are key with oversize ginghams, large pocket detail and supersize striping on the longer midi length; the new hemline this season.  Deep Med blues, sun-bleached pinks and Bordeaux wine red deliver the elegance of St. Tropez in the sixties where floral embroideries are carefully crafted and deckchair stripes are reworked on organza. Key pieces include the bold stripe skirt, organza blouse and floral embroidered skirt.

Inspired by summer days in the desert Principles by Ben de Lisi presents a sumptuous palette of pink hues anchored back with navy and ivory. Prints are block coloured and bold with spliced stripes and organic palms. The silhouette is clean and modern whilst pleating, fluted sleeves luxe textures, compact fabrications and silky hammered satins give a softer edge. Key pieces include the trouser co-ord, soft trench and colour block dress.

Beautiful florals, lace and embroidery give a modern Prairie feel to the new season Nine by Savannah Miller collection delivered in a pretty palette of lavender, pink and pastel blue with pops of vibrant orange and yellow.  The range is overflowing with summer dresses; and hero items include the embroidered midi and the daisy maxi whilst the sequin jacket, washed denims and frill blouses offer versatile separates perfect for those hazy spring days.

Boyfriend silhouettes reign supreme this season for H! by Henry Holland where sweat dresses, acid denim and  oversized tees  take centre stage. Patriotic primary hues paired with soft pinks and khaki deliver a casual athleisure vibe where the tracksuit is key. Vegas cowboys and Punk references deliver a sense of playfulness to the collection where ginghams, snake and grunge graffiti juxtapose with feminine lace and extreme ruffles for a girly twist. Key pieces include the tea dress, deconstructed sweat and Motorcross tee.

Red Herring provides a fun festival of colour this SS17, with an eye-popping colour palette of yellow, blue and red seen in ginghams, stripes and tropical florals. Texture is reworked with embroidery, smocking, crochet and printed lace detail for a true feminine feel. Key pieces include the culotte jumpsuit, embroidered trench and pinafore dress.

Debut introduces a veritable explosion of floral romance delivered using delicate lace, print and embroidery.  Contemporary silhouettes and premium fabrications in a pretty palette of vibrant red, ivory and blush provide an air of feminine modernity offering a stunning choice for all summer occasions. Must have pieces include the floral bardot dress.

The Todd Lynn/Edition collection takes you on an adventurous journey where street culture fuses with punk attitude; a key feature for SS17. Styling detail is paramount where the pinafore slip dress is layered with the essential cotton stripe shirt and the deluxe studded hoodie is worn with the masculine trouser and ultimate embroidered jacket perfect to create the modern contemporary vibe.

LONDON, 2015-9-2 — /EPR Retail News/ — British designer, Savannah Miller joins the Debenhams’ Designer portfolio with a new casual to formal line launching in Autumn/Winter 2015.  Launching in 65 UK stores at the end of August the clothing and accessories line will also be stocked in international Debenhams stores including those in the Middle East, Latvia, Turkey, Iceland, Russia, Cyprus and Denmark.

The Nine by Savannah Miller range was created to fill a market need for stylish, smart-casual wardrobe pieces for day to eveningwear.  The range comprises of luxury knits, authentic denim, ‘hi-spec’ leathers, vintage inspired laces, sequin embellishments and subtle ‘non’ print blouses and dresses.  Accessories include shoes, boots and bags as well as a range of scarves and wraps.

Savannah, who graduated from Central St Martins with a specialism in knitwear brings her signature style to the range by creating a versatile and contemporary collection that is effortless, cool and understated.  The feminine and contemporary range carries a soft neutral colour palette along
with embellishment and embroidery detailing as well as a fresh Star and Swallow prints.

On launching the range, Group Trading Director, Suzanne Harlow says, “The appointment of Savannah into our portfolio of Designers is really an exciting one.  A large proportion of our customers choose to shop with us because of our Designer offering and by recruiting Savannah we are able to offer a collection that is versatile and customers can  wear in a cool and contemporary way.”

The average selling price for the Nine by Savannah Miller range is £35 which sits between Debenhams Casual and Designers pricing architecture.  Knitwear makes up 20% of the range with pricing ranging from £30 to £50, jeans range from £30 to £45. Average pricing for accessories are £55 for bags and £45 for footwear.

Top model, Carmen Kass is the face of the collection and will feature in a print advertising campaign as well as across windows, instore, PR and digital communications.  As new stores open in the UK in Autumn Winter 15 Nine by Savannah Miller will be extended to a total of 69 stores by the end of the year.
Ends 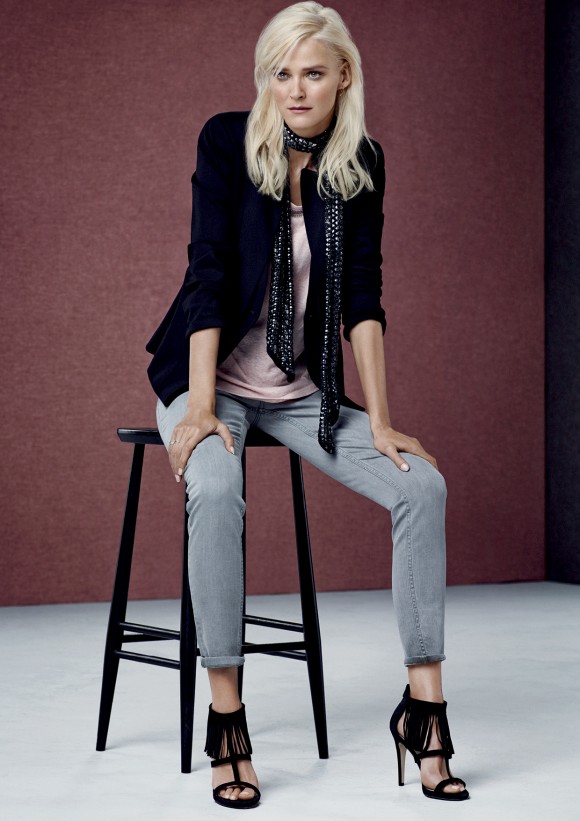