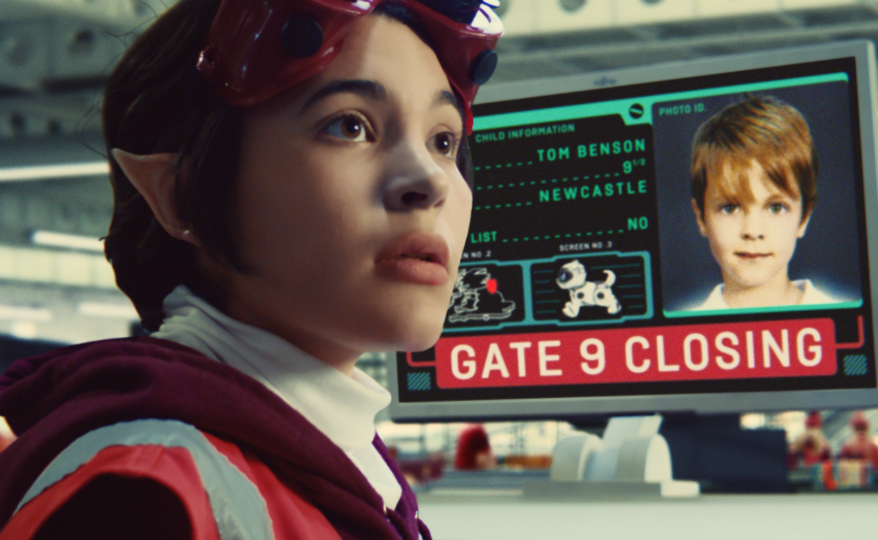 The 60 second TV commercial will transport millions of viewers to a magical Argos distribution centre where a troupe of Argos elves are helping Santa to deliver hundreds of thousands of gifts across the country at record speed on bright red super-sleighs.

In a Christmas advertising first, three children will also have the exciting opportunity to feature in the TV advert themselves. From Tuesday 7 November, parents can visit Argos’s Facebook and Twitter channels to submit an image of their child using the hashtag #ReadyForTakeOff.  Three winners will be selected and will appear on national TV in the Argos advert for a whole day each on Friday 10, Saturday 11 and Sunday 12 November.

What’s more, everyone will get a chance to see their child’s face in a personalised social media version of the advert which they can share with loved ones.  Again, they simply need to upload their child’s photo on the Argos Facebook or Twitter sites and include the hashtag #ReadyForTakeOff.

The advert, created by CHI&Partners and directed by Gary Freedman, features a futuristic rocket-powered super-sleigh ready to take off on its mission across the country. The action shifts gear as one child’s long-awaited Christmas present, a Teksta voice-recognition robotic puppy, is found wandering the aisles by an elf.  The quick-thinking elf scans it in at the elf station to reveal its intended recipient on-screen, Tom, aged nine, whose family’s gifts are departing from gate nine.

This leads to a blockbuster-style chase across the distribution centre in which the elf pulls out all the stops to ensure the robotic puppy makes it to Tom in time for Christmas.

Gary Kibble, Marketing Director at Argos, said: “We love this edge-of-your-seat, high-energy Christmas campaign, which aims to surprise and delight across all channels – showcasing Argos’s Fast Track delivery commitment to getting customers what they want, how and when they want it, faster than anyone else.

“Over the Christmas period our teams will deliver 1.7 million items to customers’ homes and process 27 million in-store transactions, and the go-getting elf in the story reflects our hard-working and dedicated colleagues who often go the extra mile to make Christmas happen for our customers.

“We hope our super-swift, stop-at-nothing Argos Christmas elves help us once again to break the traditional retailer advertising mould by adding some excitement, energy and above all speed to the nation’s Christmases this year.”

Yan Elliott, Joint Executive Creative Director at CHI&Partners, said: “Argos is ‘Ready for Take-Off’ this Christmas, and we wanted a thrillingly fast-paced campaign that would really bring to life the lengths Argos will go to make Christmas special for families across the country, in the fastest way possible. We and AllTogetherNow are particularly proud to help make Argos the first UK retailer to personalise its Christmas advert across both TV and social media – and we can’t wait to see Argos fans everywhere become part of the action.”

The Argos ‘Ready For Take-Off’ advert forms part of a 360° campaign extravaganza spanning TV, digital, print and in-store and social media activity.  Media buying was through PHD, PR through Hope & Glory and point-of-sale and digital display through PSONA.

Milton, Keynes, 2017-Apr-07 — /EPR Retail News/ — This week Argos will launch an ambitious new Spring Summer advertising campaign which no brand has ever done before – the first with a brand new, date-stamped unique advert launching every day for 80 days across 10 consecutive weeks.

Breaking on Friday 7th April, the 80 Days of Argos’ campaign, developed by CHI&Partners, is made up of a series of unique, 10-second spots, celebrating how customers can truly ‘seize today’, every day, with Argos throughout Spring and Summer by using Fast Track delivery.  The market-leading service offers four same-day delivery time slots, including evenings, seven days a week for just £3.95.

Drawing inspiration from real-world events and dates in the nation’s calendar, from the London Marathon to Wimbledon, as well as responding to the Great British weather, the campaign aims to encourage viewers to make the most of each day by getting what they want delivered today, reflecting the wants of the nation.

The campaign will spotlight the top products shoppers can order and receive on the same day with Argos.  These include the new Nintendo Switch, Beats headphones, Sony TVs, Dyson fans and outdoor goods such as bikes, paddling pools and barbecues.

Each new execution will use the products as a focal point to celebrate that day’s date in a visually creative way – such as chattering Furbies, troll dolls having a blow-dry, a TV cinema drive-in and cats typing on laptops – all set against the characteristic ‘white world’ backdrop of previous Argos campaigns.

Dan Elton continued: “It also reflects the people involved in making it happen – innovative, creative and totally customer-focused. I’m very proud of the Argos, CHI and Mindshare teams who have contributed to this campaign.”

“We hope the campaign inspires customers everywhere to seize the day and make the most of the Spring and Summer, whether that’s getting a paddling pool for the kids to enjoy a sunny day, a new TV to watch the Champions League final or a tent for Glastonbury.

Dan Elton continued: “It also reflects the people involved in making it happen – innovative, creative and totally customer-focused. I’m very proud of the Argos, CHI and Mindshare teams who have contributed to this campaign.”
Running across TV, VOD and digital, social media and in-store screens, the campaign bought by Mindshare, marks a TV media first: 80 unique pieces of copy within one campaign all running with a different date called out.

It will be supported by a responsive digital engagement campaign from AllTogetherNow – including an influencer marketing campaign in which social media stars set their fans a series of same-day challenges which can only be achieved using Argos Fast Track.

Yan Elliott, Joint Executive Creative Director at CHI&Partners, said “Argos has something worth shouting about – order something by 6pm and you still get it that day – that’s pretty amazing. So we made a pretty amazing amount of ads to celebrate it. Each one runs for a day – each features a different product. This campaign features everything you might possibly want over the Spring and Summer inspiring you to ‘Get it today’.”

Sainsbury’s Argos is a leading UK digital retailer and sells more than 60,000 products under the Argos and Habitat brands. It sells through www.argos.co.uk, www.habitat.co.uk, its growing mobile channels, its 845 stores and over the telephone. Argos Digital Stores and Mini Habitats can also be found in Sainsbury’s supermarkets.
Argos is the UK’s largest high street retailer online and the second most visited website, with nearly a billion website visits a year. More than half of the company’s sales originate online and around 120 million customer transactions take place in its stores each year.

CHI&Partners is a UK-based advertising agency. Founded in 2001, the agency is listed in the Sunday Times’ Top Track 250 and International Track 200 as the UK’s fastest-growing privately-owned ad agency both within the UK and internationally. CHI&Partners has offices spanning New York, Canada and Asia as well as Europe – working with large domestic and international clients including Argos, British Gas, Carphone Warehouse, Diageo, GSK, Lexus, News UK, Royal Bank of Scotland, Samsung, TalkTalk and Travelodge. CHI&Partners is a partner in The&Partnership.

AllTogetherNow is more than just a content agency. Built on the idea that together is better, AllTogetherNow is a unique, multi-service agency delivering exceptional creative production, social strategy, media buying and exclusive analytics solutions in one unified, responsive team. AllTogetherNow offers mass exposure as well as deep, targeted audience engagement, in real-time – a model which helped the agency win Golds awards at the 2015 & 2016 International Content Marketing Awards. AllTogetherNow is a partner in The&Partnership.

The&Partnership is an independent agency holding company where the majority owners are the founders and partners of the individual businesses, sharing one bottom line. The&Partnership comprises ten different communication businesses across four continents, with over 1,500 people,  spanning ten disciplines from advertising to design, CRM, media, data, analytics, PR and social – with digital at the core of all its businesses. The&Partnership is backed by WPP, the world’s largest communications agency network, which is both a partner and a significant minority shareholder.