​ALEXANDRIA, VA, 2014-8-14 — /EPR Retail News/ — Just as quickly as consumer optimism surged in July, it plummeted in August, even as gas prices fell by more than 15 cents over the past month.

Less than 4 in 10 consumers (39%) now say that they are optimistic about the economy, a sharp decline from 46% the month prior. Consumers age 50 or more were least optimistic, with barely one in three (35%) expressing optimism. The 7-point drop overall in optimism was the largest recorded since January 2013 when the National Association of Convenience Stores (NACS) introduced its monthly NACS Consumer Fuels Survey to examine how gas prices affect consumer sentiment.

NACS, which represents the convenience store industry that sells 80% of the gas sold in the country, conducts the monthly consumer sentiment survey to gauge how gas prices affect broader economic trends. Since the monthly surveys began in January 2013, consumer sentiment has closely tracked gas prices, with optimism rising when prices fall and vice versa — except for a few notable exceptions like last fall’s 16-day government shutdown and this month’s stock market tumble.

“The dramatic swings in consumer optimism over the past two months clearly show that sentiment remains fragile,” said Jeff Lenard, NACS’ vice president of strategic industry initiatives. “A rise or fall in everyday expenses — like gas prices — is usually an accurate predictor of sentiment unless something significant occurs, and this month it is clear that the recent sharp drop in stock prices — and concerns over world events — shook up consumers.”

While other economic concerns today weigh more heavily on consumers, gas prices remain top of mind. Nearly four in 10 consumers (39%) say that gas prices have a great impact on their feelings about the economic, a slight decrease from 41% the month prior.

If there is any good news in the findings, it’s that consumers don’t expect things to necessarily get worse — at least at the gas pump. Consumers tend to be naturally pessimistic about gas prices but less than half (47%) expect prices to be higher next month, a low for 2014 and a sharp drop from July (64%).

The National Association of Convenience Stores (NACS) survey was conducted by Penn, Schoen and Berland Associates LLC; 1,111 gas consumers were surveyed Aug. 5-7, 2014. The OPIS weekly national average price for gas was $3.508 on Aug. 4, the week in which the survey was fielded. Summary results are at www.nacsonline.com/gasprices. 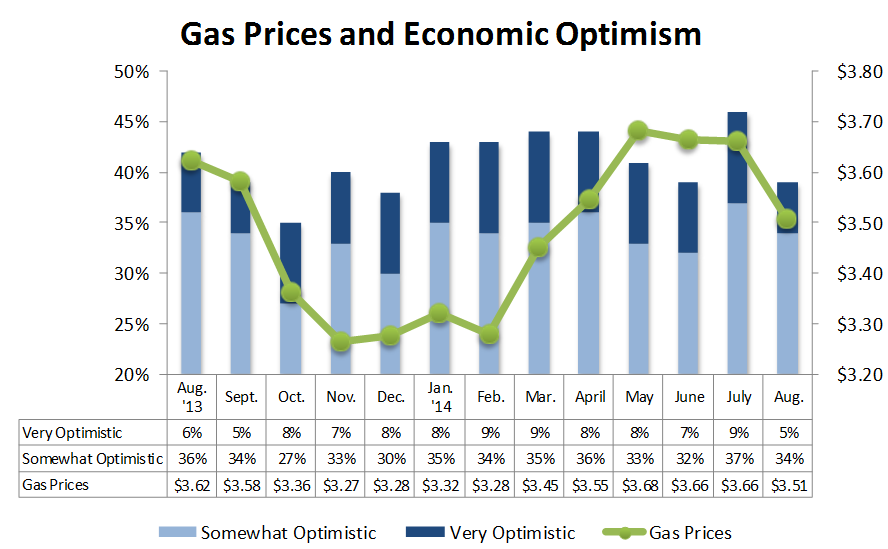