GRAND RAPIDS, Mich., 2014-8-29 — /EPR Retail News/ — Meijer, SKECHERS and K.I.D.S./Fashion Delivers teamed up earlier this week to give away 2,000 new BOBS from SKECHERS shoes to Detroit children in need during a day of fun at the Detroit Zoo.

An additional 20,500 pairs of BOBS shoes were also donated to Detroit Public Schools for distribution to its students in need throughout the school year.

“Meijer was built on a fundamental philosophy of supporting the communities where our customers and team members work and live,” said Lynn Hempe, group vice president of softlines for the Grand Rapids, Mich.-based retailer. “We’ve worked with SKECHERS for a decade, and are thrilled to bring that partnership to another level by providing children with a brand new pair of shoes that they can call their own. It was a fun day for everyone involved.”

“Through the BOBS from SKECHERS shoe donations we have done in the United States and around the world, we have seen the impact a new pair of shoes can have on a child,” said Jeff Jones, national sales manager at SKECHERS. “We were moved by Meijer’s desire to reach children in Detroit, a community that has been hard hit economically, and believe that the BOBS donation event not only brought smiles to many children, but also may have given them confidence as they begin a school year with a brand new pair of shoes.”

Since the BOBS from SKECHERS program launched in 2011, SKECHERS has donated more than 8 million pairs of new shoes to children in need in more than 30 countries worldwide.

Along with receiving their new shoes, the children had lunch, received school supplies and visited their favorite animal exhibits inside the Detroit Zoo. The shoe donation event also included an opportunity for them to meet the Detroit Tigers mascot “PAWS,” Detroit Lions alumni players and mascot, “Roary,” and the Zoo’s mascots, “Junior Z and the Zooper Heroes.”

“The Detroit Zoo strives to be relevant to our community, including providing ways to help address community needs,” said Paul Good, community and government relations manager for the Detroit Zoological Society. “We were happy to be a part of this effort to help families meet their back-to-school needs.”

K.I.D.S./Fashion Delivers worked with the Detroit Public Schools and Variety Detroit to identify children to receive the shoes.

“We are so thankful for this wonderful partnership with SKECHERS and Meijer,” said Karen Ridgeway, superintendent of academics for Detroit Public Schools. “Our students and parents were able to enjoy a day at the Detroit Zoo, and more than 20,000 students will receive brand new BOBS shoes to help ensure they have a great start to the school year. I know that this is a day they will never forget.”

“Today reminded our children that people care about them,” Variety Detroit Executive Director Jennie Cascio said. “They were thrilled about the new SKECHERS, as well as the school supplies they received from Meijer. Variety Detroit is so thankful for all of the organizations involved in this great community event and giving our children the opportunity to spend the day at the Detroit Zoo and enjoy just being kids.”

About Meijer
Meijer is a Grand Rapids, Mich.-based retailer that operates 213 supercenters and grocery stores throughout Michigan, Ohio, Indiana, Illinois and Kentucky. As a pioneer of the “one-stop shopping” concept, Meijer stores have evolved through the years to include expanded fresh produce and meat departments, as well as pharmacies, comprehensive electronics departments, garden centers and apparel offerings. Additional information on Meijer can be found at www.meijer.com. Follow Meijer on Twitter @twitter.com/Meijer and @twitter.com/MeijerPR or become a fan atwww.facebook.com/meijer.

About SKECHERS USA, Inc.
SKECHERS USA, Inc. (NYSE:SKX), based in Manhattan Beach, California, designs, develops and markets a diverse range of lifestyle footwear for men, women and children, as well as performance footwear for men and women. SKECHERS footwear is available in the United States via department and specialty stores, Company-owned SKECHERS retail stores and its e-commerce website, and in over 100 countries and territories through the Company’s international network of subsidiaries in Canada, Brazil, Chile, Japan, and across Europe, as well as through joint ventures in Asia and distributors around the world. For more information, please visit www.skechers.com, and follow us on Facebook (www.facebook.com/SKECHERS) and Twitter (twitter.com/SKECHERSUSA).

About K.I.D.S./Fashion Delivers
K.I.D.S./Fashion Delivers unites retailers, manufacturers, foundations and individuals to provide people impacted by poverty and tragedy with new merchandise, effectively distributed through a network of agency partners to improve the well-being, self-esteem and dignity of at-risk families and individuals. To date, over $1 billion of donated products have been distributed through our network, serving the poor and disadvantaged worldwide. For more information, visit: donateproduct.com. 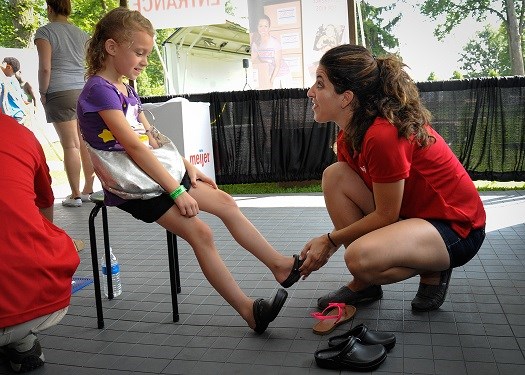 Meijer, SKECHERS and K.I.D.S./Fashion Delivers teamed up to give away 2,000 new BOBS from SKECHERS shoes to Detroit children in need