A top player in the market

The integration of the SPAR stores makes Albert a top player in the Czech market, with 334 stores, and one of the largest employers in the country, with more than 17,000 associates. Albert was able to offer 97% of SPAR associates a position in the company. Now that the rebranding is completed, the teams are now focused on winning former SPAR customers’ hearts. Albert’s ambition is to become the leading retailer in the Czech market and the best store in every town.

Keeping the best of both brands

During the last phase of the integration — the rebranding of the compact hypers – integration teams made a focused effort to keep the best of both brands. “We have made only minor changes in the stores, as they were well-appreciated and loved by customers. So customers will see all the main attributes as before, but now with lower prices,” said Albert General Manager Jesper Lauridsen.

They lowered prices of around 4,000 products to Albert levels, and introduced Albert’s fruit and vegetables offering to SPAR, with very positive feedback from customers (96% satisfied with produce freshness).

The teams tested around 700 own-brand products from Albert, SPAR and competitors to create the best assortment. They decided to introduce the Albert own-brand product line in the former SPAR stores, and in return, SPAR’s strong specialty own brands (Freeform and Veggie) will be introduced at Albert. In this way, they are doubling the own-brand assortment from 1,000 to 2,000 products, giving customers more options that fit their budgets.

Based on the strong positive perception among customers, they are keeping the deli and meat offering in the former Interspar stores as it was, with the same assortment and service level. They have also decided to roll out the Interspar meat branding, a Czech specialty meat line and several popular wines to Albert stores, recognizing these as strongpoints of the Interspar assortment.

With the additional stores, Albert is also expanding cooperation with regional suppliers. “Cooperation with local suppliers is key for us. We are responding to growing customer demand for domestic foods from their favorite manufacturers. Through these local suppliers, which we specifically promote at the point-of-sale, we have managed to achieve a greater connection with the local community,” said Jesper. 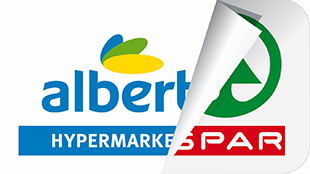