BRAZIL, 2015-11-03 — /EPR Retail News/ — Carrefour Brazil inaugurated on october 21th its first street drugstore. The Carrefour Drugstore in Rua N. Sra. da Lapa began its operation next to yet another unit of Carrefour Express, both inaugurated in the western zone of São Paulo (SP).

The new drugstore, which has a sales area of 100 m2, has a wide assortment of around 7,000 items – 800 of them in the dermocosmetics category, the best assortment in the region. With this inauguration, the network of Carrefour drugstores has reached 123 units, 25 of them in operation in the capital of Sao Paulo alone.

The commitment to the best price and variety can be seen in the unit’s wide assortment, which will also offer inauguration promotions for the generics and contraceptive categories. Carrefour Card customers can count on special instalment conditions.

The Lapa unit has already adopted the new layout developed specially for Carrefour Drugstores, with modern furnishings, new equipment and lighting, a bigger assortment and a pharmacist always at customers’ disposal. Of the 123 units spread around the country under the Carrefour and Atacadão banners, around 30 will end the year operating under the new concept.

Carrefour Express
The fifteenth store under the local banner was adapted to the characteristics and requirements of the Lapa region, taking into consideration factors like the sales area and an adequate assortment. To guarantee purchasing flexibility, the layout of the Express units is specially developed with a view to consumers’ purchasing habits and the products are organised so as to make it easier to locate the items. 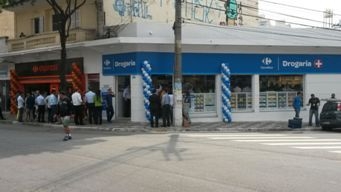