Arteixo, Spain, 2015-11-15 — /EPR Retail News/ — Inditex’s contribution is allocated to four projects: aid for Syrian refugees from the Turkish province of Kilis, aid for the Emergency Unit of the NGO and collaboration with two initiatives for medical and nutritional cooperation in India.

Inditex will allocate 2.3 million euro to four humanitarian initiatives by Doctors Without Borders in 2015. The company’s president, Pablo Isla, and the general director of Doctors Without Borders (DWB) in Spain, Joan Tubau, have today renewed three collaboration projects with a value of 2 million euro in the headquarters of the NGO in Barcelona. This agreement forms part of the convention established between both entities in 2008, through which Inditex has contributed over 17 million euro. This year, Inditex will also contribute 300,000 euro for the Emergency Unit of the NGO, which it has been financing since 2011.

Within this agreement, Inditex will allocate one million euro to assist with access to healthcare for over 100,000 Syrian refugees that are gathered in the Turkish province of Kilis. Specifically, it will be allocated to a centre for primary medical consultations and psychological care, to which Inditex already allocated a million euro between 2013 and 2014, and where a specialised team of over 40 professionals are working.

This year, Inditex also continues with its support to the Emergency Unit of Doctors Without Borders, to which Inditex contributes 300,000 euro annually. This support makes it possible to coordinate the MSF medical teams that are specifically dealing with the humanitarian aid of the Syrian refugees who are located in the European border countries.

Fight against malnutrition and Kala-Azar disease in India

The two organisations have also signed a renewal of another two conventions, with a value of one million euro, in order to fight malnutrition in children and Kala-Azar disease in the state of Bihar, one of the poorest states in India and the state with the third highest number of children at risk of malnutrition. The program to fight severe malnutrition in children began in 2009 and, up to now, over 17,000 children have received treatment. In the same region, DWB also has a plan to fight against visceral leishmaniasis, or Kala-Azar, a disease transmitted by sand flies which is fatal if not treated on time. Since the beginning of this project, in 2007, DWB has treated over 12,000 people.

Doctors Without Borders and Inditex

Doctors Without Borders is a medical-based international humanitarian organisation which is present in over 70 countries and has approximately 500 projects underway. Its main task is to assist populations that are in a precarious situation and victims of catastrophes and armed conflict.

The collaboration of Inditex with DWB forms part of the social investment of the Group, which includes social programs in collaboration with non-profit entities with experience in the geographical area in which they are carried out. In this sense, in 2014, Inditex’s investment in social initiatives was 25.8 million euro, allocated to 460 projects in 351 entities.

Because of the situation of the refugee in Europe, during 2015 Inditex has also cooperated with Syrian refugees through an exceptional contribution of more than 100,000 units of clothing, valued at approximately 3 million euro and organised in collaboration with various NGO’s. In January and April of 2015, two contributions in kind were sent through the US non-profit organisation LIFE for Relief and Development, that were delivered to Iraq and Lebanon. In September 2015, a new clothing donation was sent to the Red Cross, which was distributed in Austria. In October 2015, over 7,000 refugees in Greece received a donation of garments organised through UNHCR.

Currently, Inditex is coordinating with Red Cross the delivery of other 19,000 garments that will be delivered in the following days. 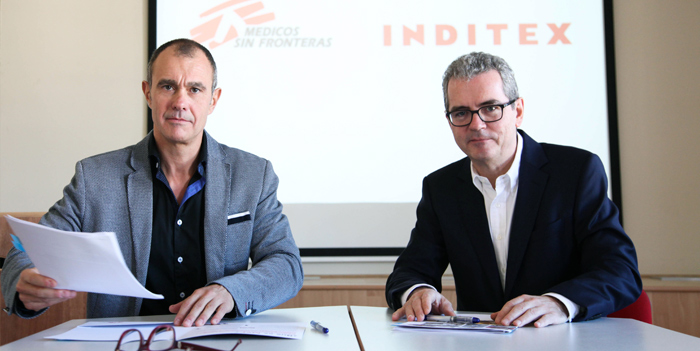 Inditex to allocate EUR 2.3 million to four humanitarian initiatives by Doctors Without Borders in 2015