Culbreth was invited to the ceremony after being named the DeCA Disabled Employee of the Year based upon his performance at the Vogelweh Commissary, Germany, as well as his support of the local Kaiserslautern community. He now works at the Nellis Air Force Base, Commissary, Nevada.

An active-duty Air Force family member, Culbreth makes significant contributions at work and in his community. Vogelweh’s store director Steven Young praised Culbreth’s attitude. “Despite his limitations, he is ready to learn new processes or to be cross-trained in other operational areas of the store. He makes it a habit to greet all patrons and co-workers with a smile and always has a committed, ‘can do’ attitude.”

Brad Carson, acting undersecretary of defense for personnel and readiness, took the occasion to praise the honorees. “The range and types of achievements and contributions our recipients have made to the Department of Defense demonstrates, better than words could ever say, that each of us is truly made of many parts.”

Culbreth would seem to be a perfect example of Carson’s comments. In addition to his work at the store, he was also well-known in the community for his volunteer efforts, spending better than 50 hours a month volunteering for the Ramstein Enlisted Spouses Association (RESA) in the RESA thrift shop on base. He also volunteered at various community outreach events sponsored by RESA.

He was named volunteer of the month for RESA in September 2014, and was one of 256 delegates sent, all expenses paid, to the Americans Working Around the Globe conference in Garmisch, Germany, last April.

“Alex Culbreth’s success is just the latest in proving the value of DeCA’s commitment to hiring the disabled,” said Kevin Hennelly, DeCA’s director for equal employment opportunity. “We all win when Alex wins. He gains financial independence and a career he can be proud of, and we gain an employee who is fully committed to DeCA’s values in serving the most deserving.”

About DeCA: The Defense Commissary Agency operates a worldwide chain of commissaries providing groceries to military personnel, retirees and their families in a safe and secure shopping environment. Authorized patrons purchase items at cost plus a 5-percent surcharge, which covers the costs of building new commissaries and modernizing existing ones. Shoppers save an average of more than 30 percent on their purchases compared to commercial prices – savings amounting to thousands of dollars annually. A core military family support element, and a valued part of military pay and benefits, commissaries contribute to family readiness, enhance the quality of life for America’s military and their families, and help recruit and retain the best and brightest men and women to serve their country. 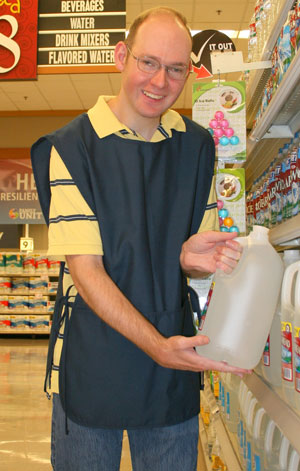