SEATTLE, 2015-11-20 — /EPR Retail News/ — Seahawks running back Marshawn Lynch surprised baristas at a Bellevue Starbucks and thanked them for making his namesake beverage in support of his foundation.

The beverage is available during the rest of the football season in Starbucks® stores in Washington state and Oakland to benefit Lynch’s foundation. For every Beast Mode Frappuccino purchased, Starbucks will donate 24 cents – which coincides with his jersey number – to the Fam 1st Family Foundation, up to $100,000. Starbucks kicked off the new collaboration with a $24,000 contribution to the foundation.

“It’s incredible the impact we can make on people’s lives and 24 cents can turn into thousands of dollars for his foundation,” said Katie Akers, a seven-year Starbucks partner (employee) and store manager of the location Lynch visited.

Like Lynch, Starbucks is on a mission to support young people with a focus on 16- to 24-year-olds who are not in school and are not employed. There are nearly 6 million people in the U.S. today in that demographic. They’re often called “opportunity youth” because not only are they seeking opportunity, but they represent untapped opportunity for businesses needing new talent.

“Some of my most successful partners have been in that group,” said Jonah Lewis, who has been a Starbucks manager in the Bellevue area for seven years.

Lewis said he was 22 years old when he became a Starbucks store manager, and the “greatest part” of his job is being able to hire someone and give them an opportunity.

“It’s inspirational to work for a company that positions itself as a forum to use our resources and our assets to better the community,” Lewis added.

Starbucks has committed to hiring 10,000 Opportunity Youth by 2018, and is part of a coalition of more than 30 companies that collectively plan to hire 100,000 in the next five years. 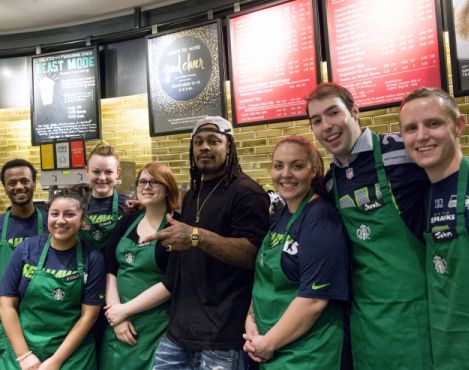