Tangerang, Indonesia, 2015-12-15 — /EPR Retail News/ — PT. Matahari Putra Prima Tbk (MPPA), a multi-format modern retailer in Indonesia, through Hypermart and Foodmart is in a collaboration with Tetra Pak. Tetra Pak is a leading food packaging company in the world that partners with EcoBali and continue the CSR program “One Pack, One Act for Our Earth”, where the program’s inauguration is conducted at Hypermart Bali Galeria.

This program portrays a form of awareness by MPPA and Tetra Pak Indonesia on the environment, at providing an educational facilities and real action to build awareness and develop a conscious behavior to consumers on the environment and society at large.

MPPA and Tetra Pak Indonesia have set up five Tetra Pak cartons collection centers at Hypermart and Foodmart outlets in Bali. This program aims for customers real action to bring Tetra Pak carton packages that have been consumed to the drop box to be collected and recycled. The “One Pack, One Act for Our Earth” campaign program in Bali in 2015 will last for three months.

The Customers can get a free exciting recycling education at Hypermart Galeria and given the opportunity to get souvenirs made from recycled Tetra Pak carton packaging as a form of appreciation for the support and real actions.

Danny Kojongian, Director of Corporate Communications MPPA said “Following the success of the program “One Pack, One Act for Our Earth” that has been done in several Hypermart outlets in Greater Jakarta area previously, we are proud to be able to continue this CSR program in Bali to work together with EcoBali community. On this occasion, we also invite Foodmart (MPPA supermarket business) together with Hypermart to actively participate in this program. ”

“We expect this CSR program is well received by consumers and the people of Bali as a form of concern to preserve the surrounding environment together through active participation in efforts to recycle used cartons packages” he continued.

Mignonne N.B. Maramis Akiyama, Communications Director Tetra Pak Indonesia also stated “It is an honor for Tetra Pak Indonesia to launch the program ‘One Pack, One Act for Our Earth’ in Bali, given that Bali is one of an area in Indonesia which has a high conscious for the environment. We have partnered with EcoBali since 2007 to collect Tetra Pak cartons in Bali through a number of schools, hotels, villas and housing. We hope that this unique collaboration with Hypermart, Foodmart and EcoBali can increase the interest and behavior to recycle the used carton packages for the realization of Bali Green Province. ”

About Tetra Pak®
As the the worlds leading food processing packaging company in the world, Tetra Pak’s motto PROTECTS WHAT’S GOOD® reflected in the values of the work done by Tetra Pak to provide safe food, anywhere.

With operating in more than 175 countries and over 20,000 employees, Tetra Pak believes in responsible industry leadership, in creating profitable growth along with the desire to be a good corporate citizen and a pattern of sustainable business approach

Tetra Pak is partnering with its customers to deliver the right solutions in the field of food processing and packaging and will continue innovating to create practical, innovative and environmentally friendly product to millions of people around the world.

About eco Bali Recycling
ecoBali Recycling is a company engaged in the environment, especially in “Responsible waste management”. With the primary vision to achieve “zero waste”, EcoBali has several environmental programs such as environmental education to schools, non-organic waste collection services, composting, waste management consulting for businesses and the tourism sector, and to encourage the implementation of best course of action for the environment and sustainable solutions.

EcoBali partnered with Tetra Pak since 2007 and is responsible for collecting Tetra Pak packages in Bali. In this program EcoBali collaborate with collectors, schools, tourism sector, as well as the community. 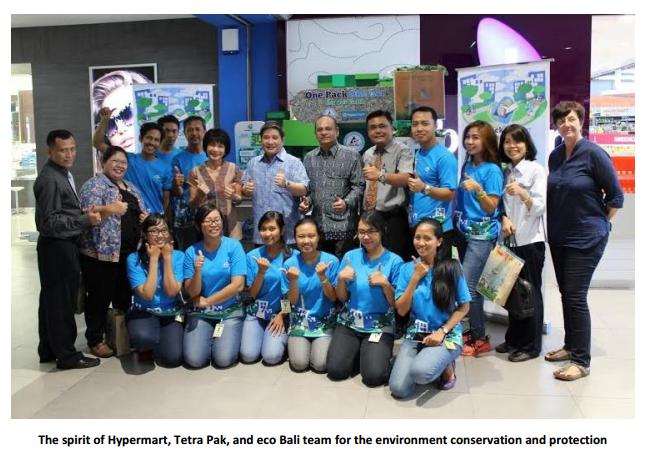