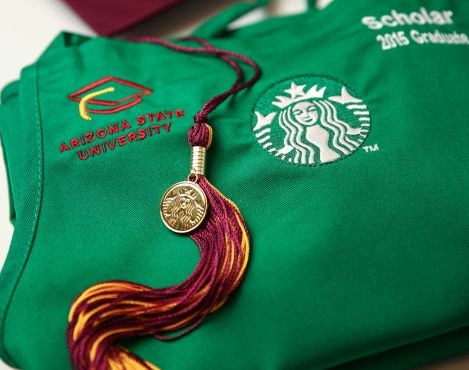 More than 40 Starbucks partners (employees) received their degrees through the Starbucks College Achievement Plan in December, and will embark on a brighter future without being weighed down by student debt.

Already enrolled with Arizona State University (ASU), Andrews had a handle on the challenges and rewards of online education. The two-year Starbucks partner was becoming more adept at balancing her schedule to accommodate work, study and free time. And, because she had a year completed through ASU’s online campus when the Starbucks program began, she was familiar with all the support resources the university provides to lay the foundation for academic achievement, including academic success coaches; eAdvisor, which monitors a student’s progress to stay on track for graduation; and Major Maps, step-by-step roadmaps for each degree program.

The one big change was her realization that the looming financial burden she was dreading would be disappearing. Full tuition coverage was previously available to juniors and seniors when the program launched in 2014. Beginning in April of 2015, Starbucks and ASU extended full tuition reimbursement to all eligible partners including sophomores and freshmen.

“I actually applied for student loans the week before the Starbucks announcement was made,” Andrews said. “I was able to more or less finance the first year at ASU through different types of help and financial aid, but then I realized if I really wanted to continue it was going to be tough. I was going to have to apply for student loans, which I didn’t want to do. I was thinking of taking time off and just saving for college. Then the Starbucks College Achievement Plan was announced and it became an easy decision for me.”.

Today, Andrews has her B.A. in organizational leadership.

Madison Schmitt, a Starbucks® store shift manager, is also celebrating her new ASU degree in psychology. Schmitt said she was “astounded” with the quality of her education and the consistent, responsive care she received from Starbucks and ASU staff and advisors. She also found the ASU experience to be “remarkably applicable and impactful” to her day-to-day life and career interests.

With career aspirations in human resources, Gabriel Adolphe also has a new degree through the Starbucks College Achievement Plan. “I feel blessed for the opportunity and ability to finish college,” he said. “Due to financial reasons, I was unable to finish my degree in the past. Since rejoining Starbucks, the partnership with ASU has given me the chance to pursue my education affordably.”

They are among the 43 Starbucks College Achievement Plan students who graduated from ASU this month – the largest group of grads yet in an ongoing drive to get 25,000 Starbucks partners ASU diplomas by 2025.