STARBUCKS, 2016-1-12 — /EPR Retail News/ — With the Starbucks for Life sweepstakes wrapping up yesterday (January 11), winners of a free beverage or food item every day for the next 30 years are taking stock of their good fortune.

For the second consecutive year, Starbucks has presented the sweepstakes. This year, My Starbucks Rewards® members had an opportunity to win instant prizes, like bonus stars, or a game piece to place on their game board for the chance to win Starbucks for a day, a week, a month or a lifetime.

Seven customers – five in the U.S. and two in Canada – took the grand prize. In addition to the daily free beverage or food item, they’ll receive the Ultimate Starbucks Card made of 10K hammered gold and engraved with their name.

Here are some of the grand-prize winners from this year’s Starbucks for Life sweepstakes.

Trying Everything on the Menu 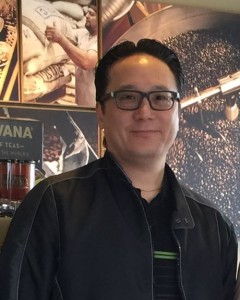 David, a resident of California’s Sacramento County, has been ordering the same drink at his local Starbucks for three or four years: an iced Americano with peppermint and extra ice. It’s gotten to the point where the baristas start making his drink when they see him coming.

That kind of familiarity played into his winning Starbucks for Life. One of his regular baristas encouraged him to give the sweepstakes a shot. If nothing else, he expected he’d be able to earn extra stars toward a free drink. Then just after midnight during the holiday break, he found himself staring at his mobile phone screen in disbelief.

“I sat there for a little bit,” he said. “I kept processing for a while. Then I finally shouted to my wife, ‘I won the grand prize!’ I’ve never won anything before, so I was freaking out.”

Now that he’s won Starbucks for Life, he is open to branching out beyond his regular Americano.

“I plan to broaden my horizons,” said David, who has been coming to Starbucks since the 1990s. “I think I’ll try everything on the menu.” 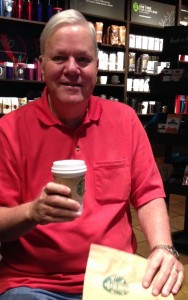 Bill usually isn’t interested in sweepstakes, but he decided to give the Starbucks for Life a shot. A bit of a skeptic, the Florida-native didn’t give it too much thought when he came up a top-prize winner playing the Starbucks for Life game on his smartphone, assuming his name would go into a larger drawing and that would be that. Next thing he knew, he was being told he was indeed one of a handful of winners of Starbucks for Life in the U.S. and Canada.

Bill, who’s retired and lives in suburban Atlanta, said he’ll have no trouble making use of his Starbucks grand prize.

“I drink my coffee black so I can enjoy the taste and aroma of the coffee,” he said, adding that dark roast is his choice both in the store and at home.

Bill visits Starbucks several times a week, sometimes just to drop in and get a coffee for the road, other times to socialize with friends. His victory did prompt him to uncharacteristically buy a lottery ticket just to see if he was on a roll. No luck there, but he still has his Starbucks winnings to savor.

Editor’s note: This story will be updated as additional winners claim their grand prizes.

Starbucks For Life winner David, with Starbucks partners in California