Hypermart Kuala Kapuasis the 4 th Hypermart outlet opensin Central Borneo, after the opening of 3 outlets in Palangkaraya, Pangkalan Bun, and Sampit. Based on the Company’s observation, the area of Kuala Kapuas refers to “Water City” which is located nearby the longest river in Indonesia, Kapuas river is one of the most develop city in Borneo.

The new G7 concept of Hypermart Kuala Kapuas will bring shopping comfort and convenience to the next level. The outlet offers wider shopping aisle with the products color scheme has been arranged in harmony with the eyes.

Ready to Eat area is extended with a choice of both local and international food and beverages. Bulk food also comes with the modern display concept. Overall store design looks more modern and appealing to bring the best shopping experience for customers. 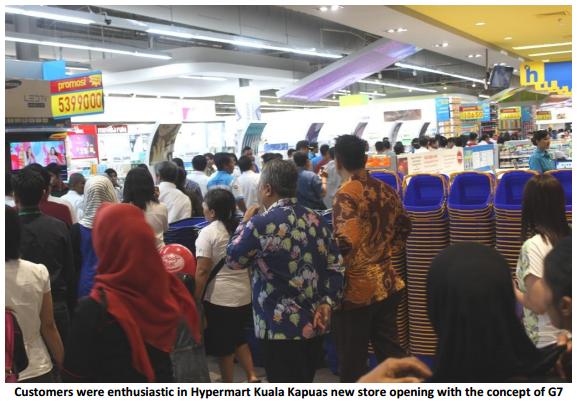