Customers and associates can support their local children’s hospital through the supermarket chain’s nonprofit arm, The Food 4 Less Fund, by donating their spare change in collection canisters located at the checkstands in their neighborhood Southern California Food 4 Less store. The children’s hospital fundraising campaign runs through May 24, 2016.

Children’s hospitals that will benefit from the program include:

“Food 4 Less believes strongly in giving back to the communities our stores serve,” said Bryan Kaltenbach, Food 4 Less president. “We’re pleased to extend our commitment to community service to our local children’s hospitals. We cannot think of a better way to invest in our communities than by giving families and children hope through our support of the outstanding work these hospitals are doing to provide world-class medical care for children.”

Since 2005, Food 4 Less, its associates and customers have given more than $1.3 million to children’s hospitals.

About Food 4 Less:
Headquartered in Los Angeles, Food 4 Less operates 131 price-impact, warehouse-format supermarkets under the banners Food 4 Less in Southern California, Illinois and Indiana, and Foods Co in Central and Northern California. Last year, Food 4 Less contributed more than $4 million to support education, hunger relief, women’s health and local nonprofit organizations in the communities served by the company’s stores. Food 4 Less is a subsidiary of The Kroger Co., (NYSE:KR), one of the nation’s largest grocery retailers, headquartered in Cincinnati, Ohio. For more information about Food 4 Less, please visit our website at www.food4less.com. 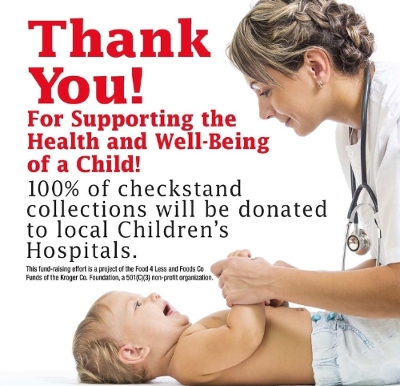